Episcopal welcomed Sarah Bernhardt '11 as the featured speaker for this year's Edward H. Vick, Jr. '62 Veterans Day Chapel. Sarah is a submarine service veteran and graduate of the United States Naval Academy, where she majored in Oceanography (B.S.), and minored in Chinese language (Mandarin). 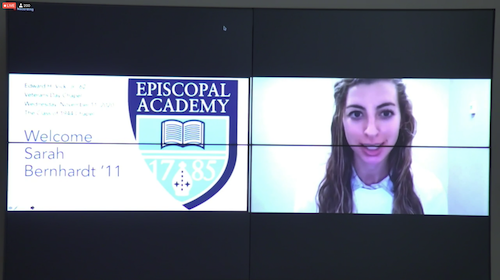 Sarah joined the Chapel service virtually and offered her Chapel Talk to students, faculty, staff, alumni, and dozens of alumni veterans, both near and far,who were able to watch a livestream of the service. She began by speaking directly to Episcopal's junior class, who were able to attend the service in-person and who are currently completing their college applications.

"Like many of you, I had no idea where I should go, but I knew it was an important decision," she began. "My oldest brother attended the United States Naval Academy and convinced me to apply for a program called Summer Seminar." Summer Seminar is a week-long opportunity for rising high school seniors to experience leadership and military seminars, camaraderie building exercises, as well as extensive physical training. The week culminates with Sea Trials, a seven-hour team event of obstacle courses and boat races. 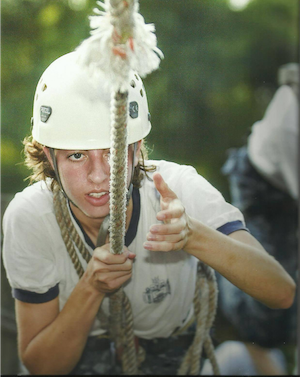 "Five hours in, covered in some mixture of dirt, seawater, and sweat, I knew that I had found my perfect fit," she went on. "And from that point onward, my 3,691 college options gave way to a single one. I was going to do everything I could to go to the United States Naval Academy."

Sarah went on to describe her experience as a midshipman at the Naval Academy., where she was the co-captain of Navy's Women's Indoor and Outdoor Track and Field Teams and was awarded All-Patriot League Team honors.

"At the Naval Academy, I had the privilege of exploring leadership on both a small, personal scale and large, formal scale," she said. She learned that "leadership is not a one size fits all mold. It must be tailored to those you are leading and tailored to support the goals you want to achieve."

Each summer at the Naval Academy, students are given exposure to a different warfare community to help them make their selection for their service after graduation. Sarah selected submarine service, which had been previously closed to women until 2012. Sarah trained in theoretical and operational nuclear engineering for two more years before being stationed on the USS Georgia (Gold Crew). She described these two years as, "rigorous, exhaustive schooling in nuclear engineering theory and practice." 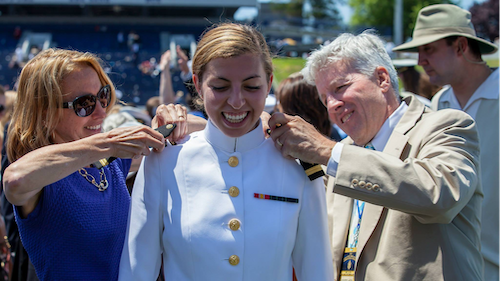 At first, Sarah was one of only five women on the giant vessel, which is the length of two football fields and the height of a two-story building. She described the cramped and cold quarters, the two-minute "showers," the breakfast of powdered eggs, and the other experiences of life on a submarine. "On the submarine, I discovered the unique leadership challenges associated with leading 20 men who had never had a female leader. I was equally responsible for their successes and, maybe even more importantly, their failures, despite the fact that I had just arrived on board and some of them had over a decade of service in the submarine community."

Sarah went on to explain that no leader goes without failure, but they also don't go without the help of their team. "That is something I believe is invaluable to know as you mature, trust, and learn from your peers," she said. During her time onboard, the submarine integrated enlisted women to the team. Sarah was grateful to have the experience as to grow as a leader during such an important time of change. 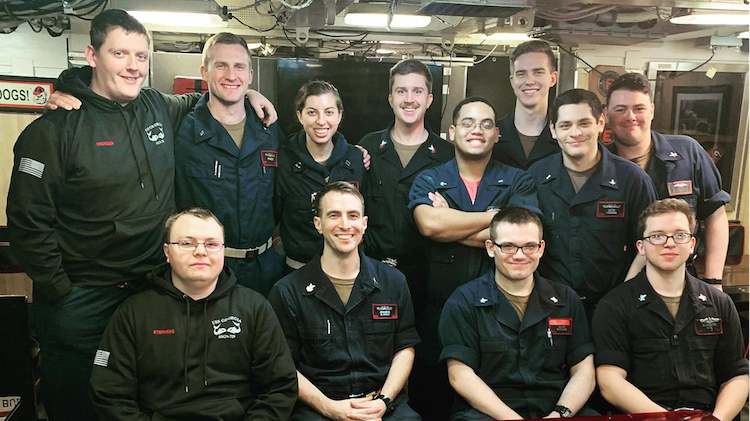 Her service on the USS Georgia lasted for three years and included three separate deployments across the globe. She traveled to China, Japan, Greece, and islands in the Indian Ocean. After five years on active duty, she transitioned to the civilian sector. She currently lives in Pensacola, where she works for Beast Code, a software engineering company dedicated to creating virtual training and logistics solutions for the Department of Defense. She is also pursuing her Masters in Engineering Management from Duke University.

"All service requires sacrifice," Sarah said. "Whether it's on a submarine, picking up trash on an interstate, or making dinner for a friend, service places other needs before your own comforts. On Veterans Day especially, let us not forget that some sacrificed all. But whatever the size of the sacrifice, it is never in vain."

She closed by inviting all EA students to serve their classmates, their communities, and their country. The Edward H. Vick, Jr. '62 Veterans Day Chapel is named in honor of Mr. Vick's many years of service to EA, in celebration of his service to his country as a veteran, his esteemed tenure on the Board of Trustees, and his passionate advocacy for Veterans Affairs.