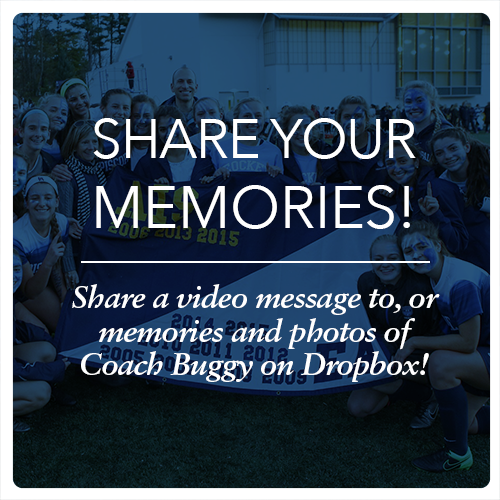 Long-time Episcopal Academy Athletic Director Gina Buggy, Hon. has announced that she will retire at the end of the school year.

"Now seems like the ideal time. Our athletic program is flourishing overall, and we have tremendous coaches leading our programs and strong support from our administration," shared Coach Buggy. "I am really excited to explore new horizons beyond EA while I am still young and active."

Coach Buggy was hired in 1986 as the girls' assistant athletic director and varsity field hockey coach. She joined EA during a time when the school was focused on attracting strong female students and athletes.

"Even though female students began enrolling in 1974, many families were still unsure about sending their daughters to EA," explained Greville Haslam Head of School Dr. T.J. Locke. "The best female student-athletes were opting for the local single-sex schools, and it was challenging to field strong teams in those early days. It was going to take someone with great vision, determination, and talent to successfully build the girls' athletic program."

Seven years later, in 1993, Coach Buggy was named EA's head athletic director. Under her leadership, 30 varsity teams have won more than 150 Inter-Ac and PAISAA championships. For 34 years she has been on the sidelines, often tucked away from sight. "I prefer to watch without distractions, so I can really appreciate and pay attention to what our athletes are doing sport to sport."

The importance of playing for a team, not oneself, is the backbone of her coaching philosophy. "I want our student-athletes to always work hard," said Coach Buggy. "I want them to know a positive 'can do attitude' goes a long way and to appreciate the impact you can make on a team or a group by giving your all for the betterment of the team."

"Ms. Buggy had the rare ability to shoot straight with young athletes, tell them what they needed to hear not what they wanted to hear, and to do it with empathy and love," shared Matt Bailer '97. "I would not have been ready for D1 sports if not for her." 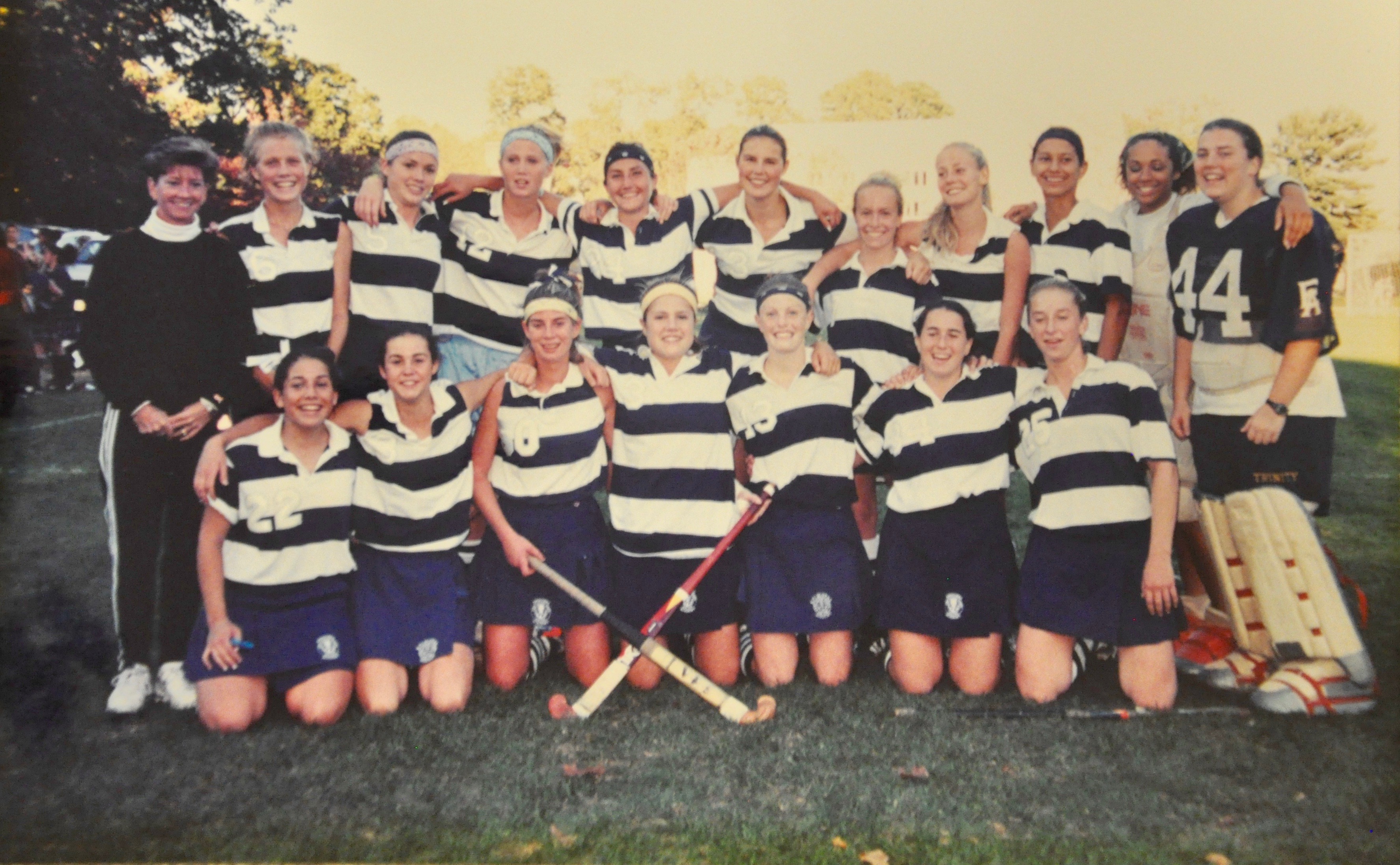 Amanda Vos Strache '99 played for Coach Buggy and, after playing at Stanford University, returned to EA as the long-time assistant varsity field hockey coach. "Exponentially, Gina has impacted thousands," said Ms. Vos Strache. "She has done so much foundational work to build a relationship so that each student-athlete responds in the most positive way. She makes us work to achieve what she sees is our potential."

"I think it's hard to coach at any level if you don't have a genuine passion for what you are doing and a genuine interest in the overall development of young people." said Coach Buggy. "You coach from the joy that you get from being around young people who inspire you."

She will close out her EA field hockey coaching career in November during her last AIS Day game and PAISAA tournament. After coaching 570 games at EA, she admits that she still gets the jitters. "I do get nervous. I get nervous for every game because I want the kids to be at their best." 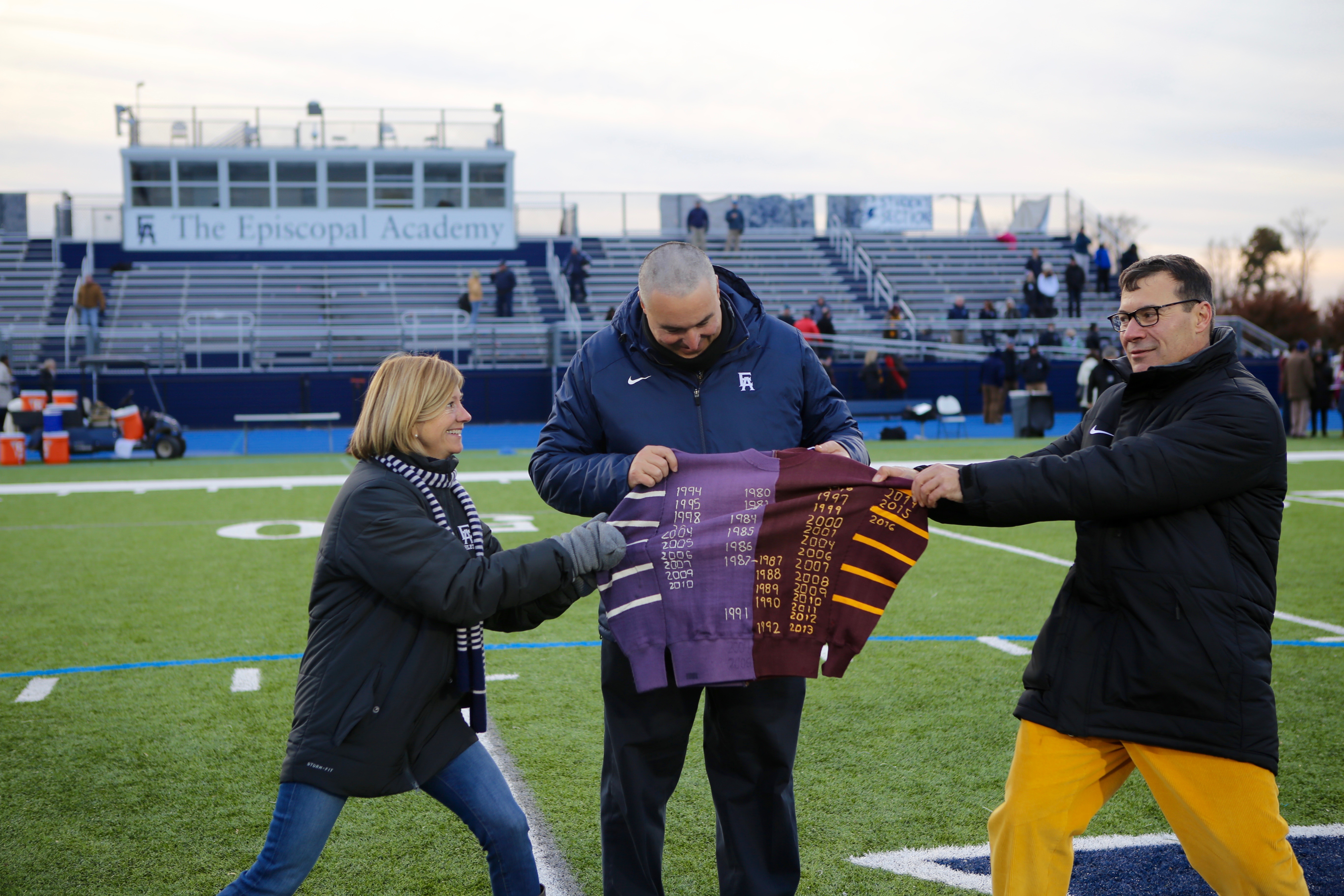 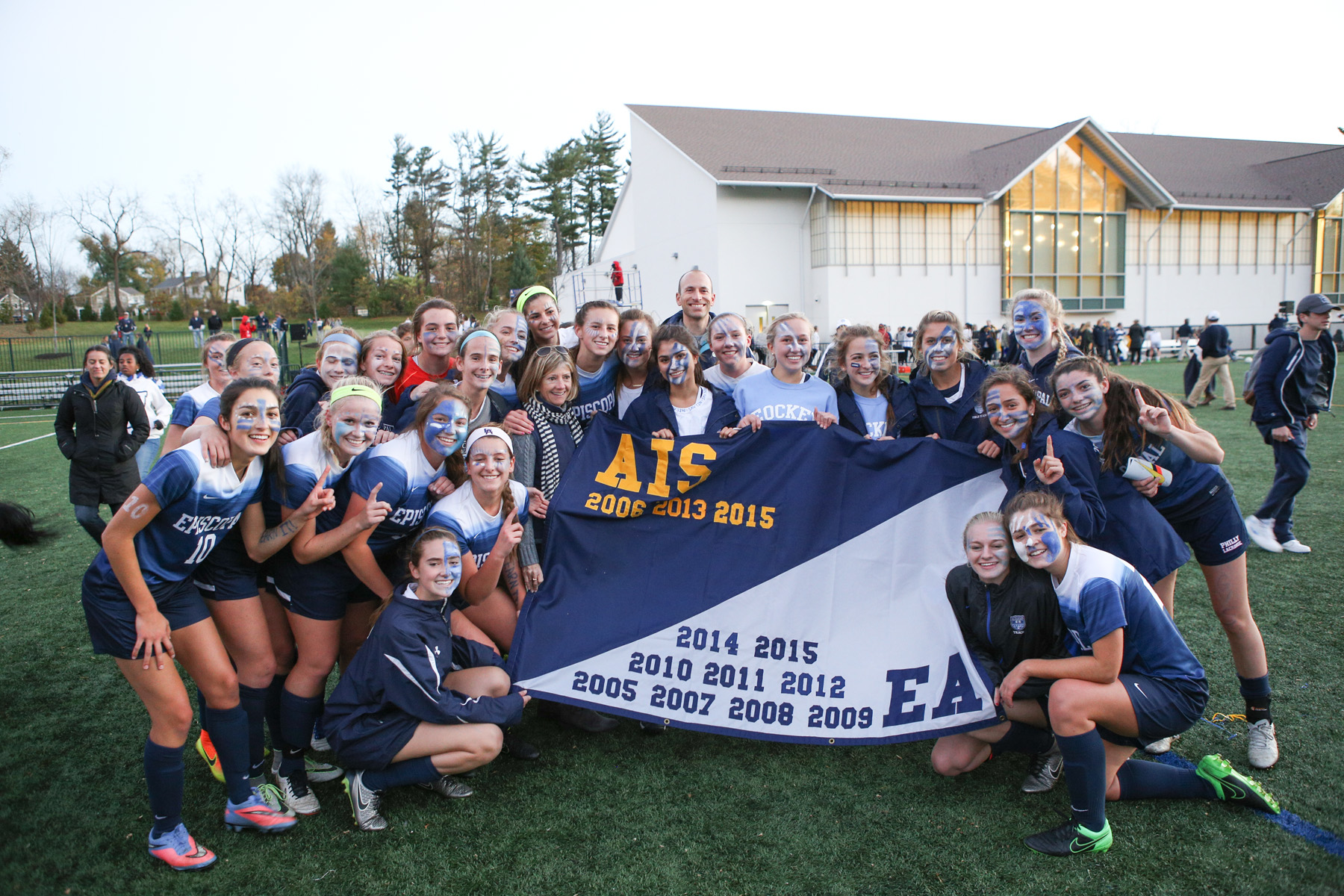 The pacing and nerves started on a recent Monday morning for the annual match up against rival Academy of Notre Dame, a game that was to be played five days later on Friday. "I think I was more nervous this year for the Academy of Notre Dame game than in years past." Her message to her players has remained consistent. "Be your best today, and let's get the ball!"

With seven games left in the regular season, Coach Buggy's overall record stands at 468-97-11. "I just want them to go out and fight for every single victory. If you get the victory, great. If you don't, then you are back at it the next day, together as a team." said Coach Buggy.

"When we talk about the ideal teacher-coach-mentor at EA, we often describe someone who lives the Stripes and exemplifies our motto," said Dr. Locke. "We think of someone who always puts students' best interests first, who genuinely loves working with young people, who demonstrates humility and selflessness, and who motivates everyone around them to be their best selves. I can think of no better way to describe Gina Buggy."

Gina Buggy was a standout field hockey and lacrosse player at Ursinus College and played on the 16-member U.S. Women's National Field Hockey Team (1981-1984). The team won a bronze medal in the 1984 Olympics, the last U.S. women's team to earn an Olympic medal.

Ms. Buggy has also earned multiple Hall of Fame honors including: the National Field Hockey Coaches Association Hall of Fame, Plymouth-Whitemarsh High School Hall of Fame, Ursinus College Hall of Fame, and the Montgomery County Chapter of the PA Sports Hall of Fame. In May, she was awarded the region's Michael F. Mayock Distinguished Teacher-Coach Award, which recognizes those individuals who impart the highest level of integrity, professionalism, and concern for the total education of Inter-Ac student-athletes. 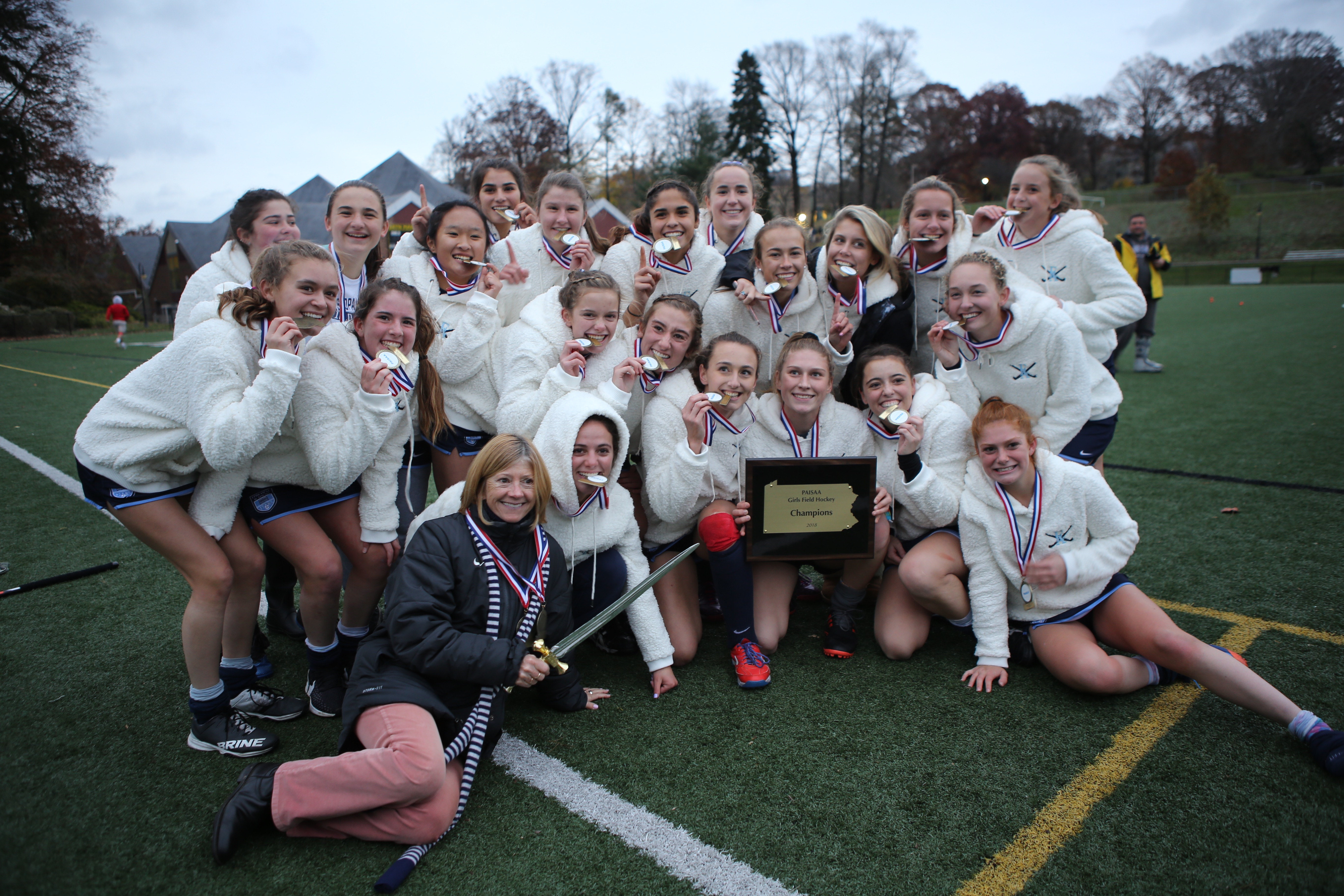 "I have learned so much personally and professionally from the many dedicated educators and motivated student-athletes at EA," said Coach Buggy. "I am grateful beyond measure for these learning experiences, and I am eager to pay this forward, as I explore new adventures."

As the team prepares to take the field against Notre Dame, or really any team on the schedule, Coach Buggy persists, "Let's pick up the pace, get back to the center, and get the ball!"

Her thoughts about spending a 34-year career at EA? "It doesn't feel like a career. It feels more like a hobby. It feels like something you do because you really enjoy it," reflected Coach Buggy.

And rest assured the hundreds of players touched by Coach Gina Buggy will never, ever forget, "we have to move to the ball!"

In 2016, Coach Buggy was inducted into the National Field Hockey Coaches Association Hall of Fame. Check out the special tribute video that was played during the ceremony.