Getting "Set" for Radium Girls & Little Mermaid Jr.
Nov 3 2021
The stage is set for the Domino Club's fall production of Radium Girls.
"Welcome to the after-school chaos," laughed Theatre Technical Director Kelly Leight-Bertucci, Hon. as the tech crew gathered to work on set design.
"Every show has its own set of challenges," explained Ms. Leight-Bertucci. "For Radium Girls one of the trickiest parts is that we have a Middle School show starting tech setup one week after Radium Girls closes."
The Domino Club's fall production is traditionally held in the Ridgway Blackbox Theater. But this year, the show was held in The Carrafiell Family Theater to allow for audience social distancing. The set for Radium Girls was dismantled on Sunday, Nov. 7. Setup for the Middle School Harlequin Club's Little Mermaid Jr. began the very next day. 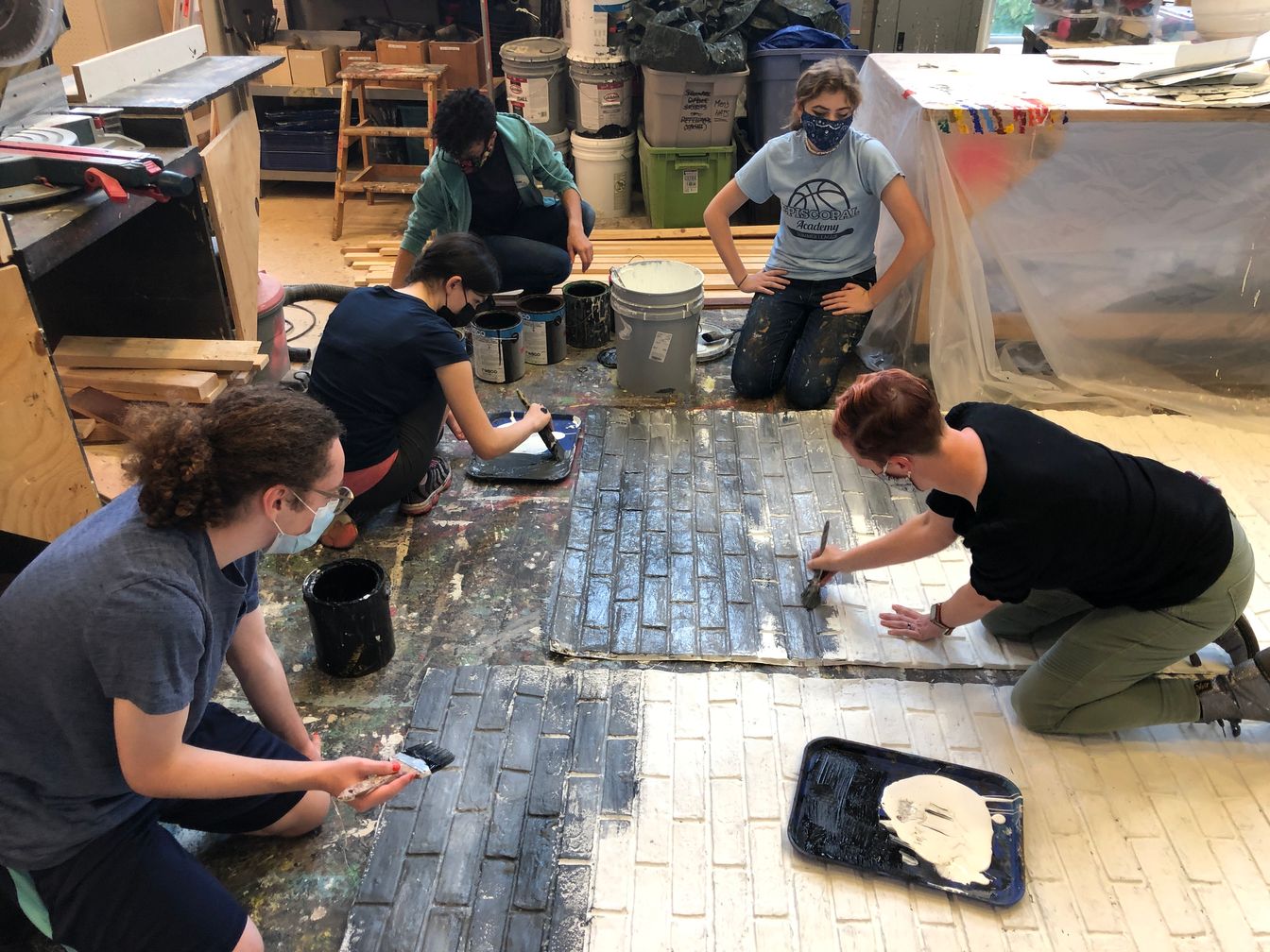 "This means that we have to share some set pieces and stage floor treatments," said Ms. Leight-Bertucci. "Our student design team has met this challenge with creativity and has created something that helps tell each story and is visually interesting."

Senior Caroline Madeira is the set designer for Radium Girls and also worked on lighting and projection design. "The fall play is announced in early August. With the announcement, I gained access to the script and read it while writing notes for both lights and sets," shared Caroline. "Before the school year, we really had no idea what space the show would be in, so it was difficult to come up with ideas, but it has all come together."

"We had a lot of formal and informal meetings when school was beginning to make sure we had a design that would work for both shows," explained Middle School Theatre Director Gina Tomkowich. "We definitely had to make sacrifices and compromise because the two shows are so different."

"There is so much brick!" observed Ms. Leight-Bertucci as members of the tech crew painted large panels of fake brick.
"Be sure and paint in the cracks," suggested Caroline. "This is the brick that will go around the projector screen. For Little Mermaid Jr., we will take the windows off around the brick and make it look more like a ship." 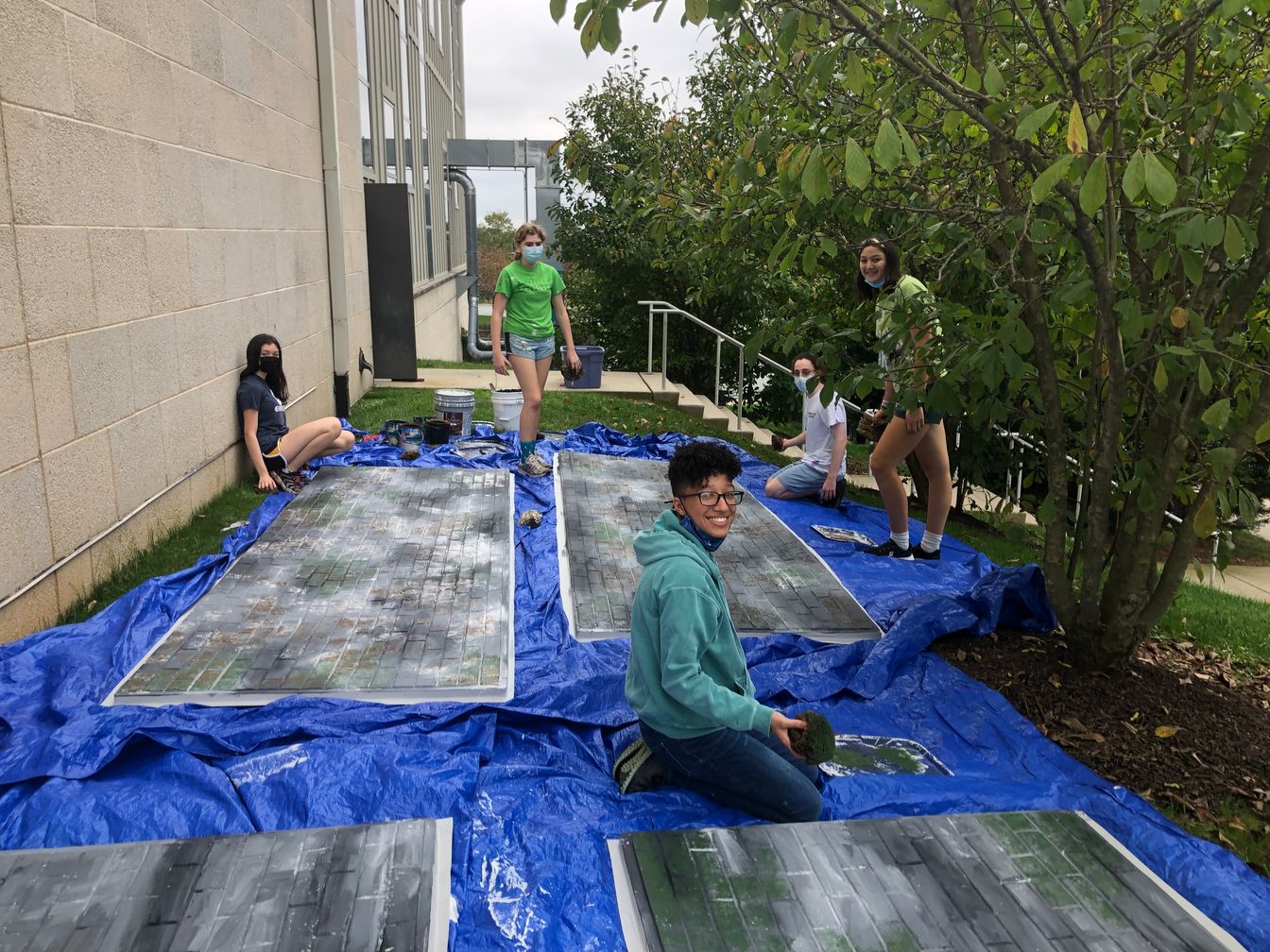 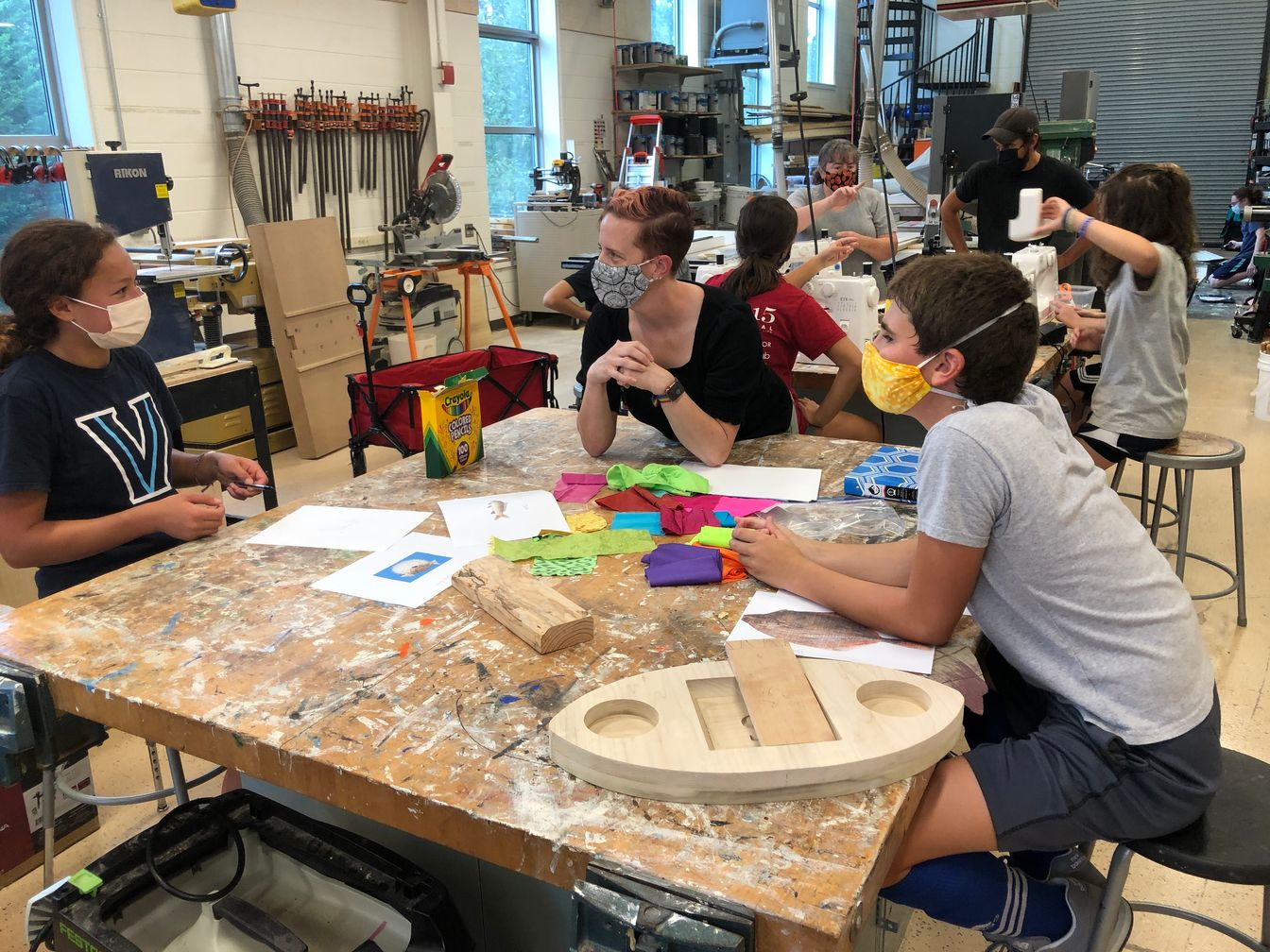 "Time is of the essence," said Ms. Leight-Bertucci. "Be sure and leave some spots as you paint. That's how we have texture. You want to have variation."

"During the design process, Caroline and I met with Theatre Director Dan Clay, Hon., and Ms. Tomkowich to discuss the needs of each show," said Ms. Leight-Bertucci. "Caroline has worked hard to creatively meet the set demands of each show. It has been challenging, but it's an opportunity that designers don't always get."

COVID-related supply chain issues, a lumber shortage, and staying on budget also had to be considered.

"We did run out of bricks halfway through the projection screen construction, and when we went to order more, the shipping was $800, or something incredibly absurd," explained Caroline. "We ended up solving the problem by having the assistant technical director drive to New Jersey to pick more up. COVID has made expecting materials through mail very difficult."

Another challenge is managing all of the microphones for the cast. "Because of the size of The Carrafiell Family Theater, the actors need mics in order to be heard in the audience, which isn't the case in the Black Box," said Caroline. "Mics add an incredibly difficult layer to this show."
Sophomore Annie Lee was in change of mixing the microphones live- a first for an EA production, along with the sound effects. "The show needs sound to be alive and real. We have 30 to 40 effects." said Annie. "It makes it more realistic and interesting."

The tech crew also used projections to add context to the scenes. "Because the set stays the same the entire show besides the furniture," said Caroline. "During reporter scenes, newspapers corresponding to the event will appear. Some of them were even custom-designed by our technicians with the exact headlines the reporters mention." 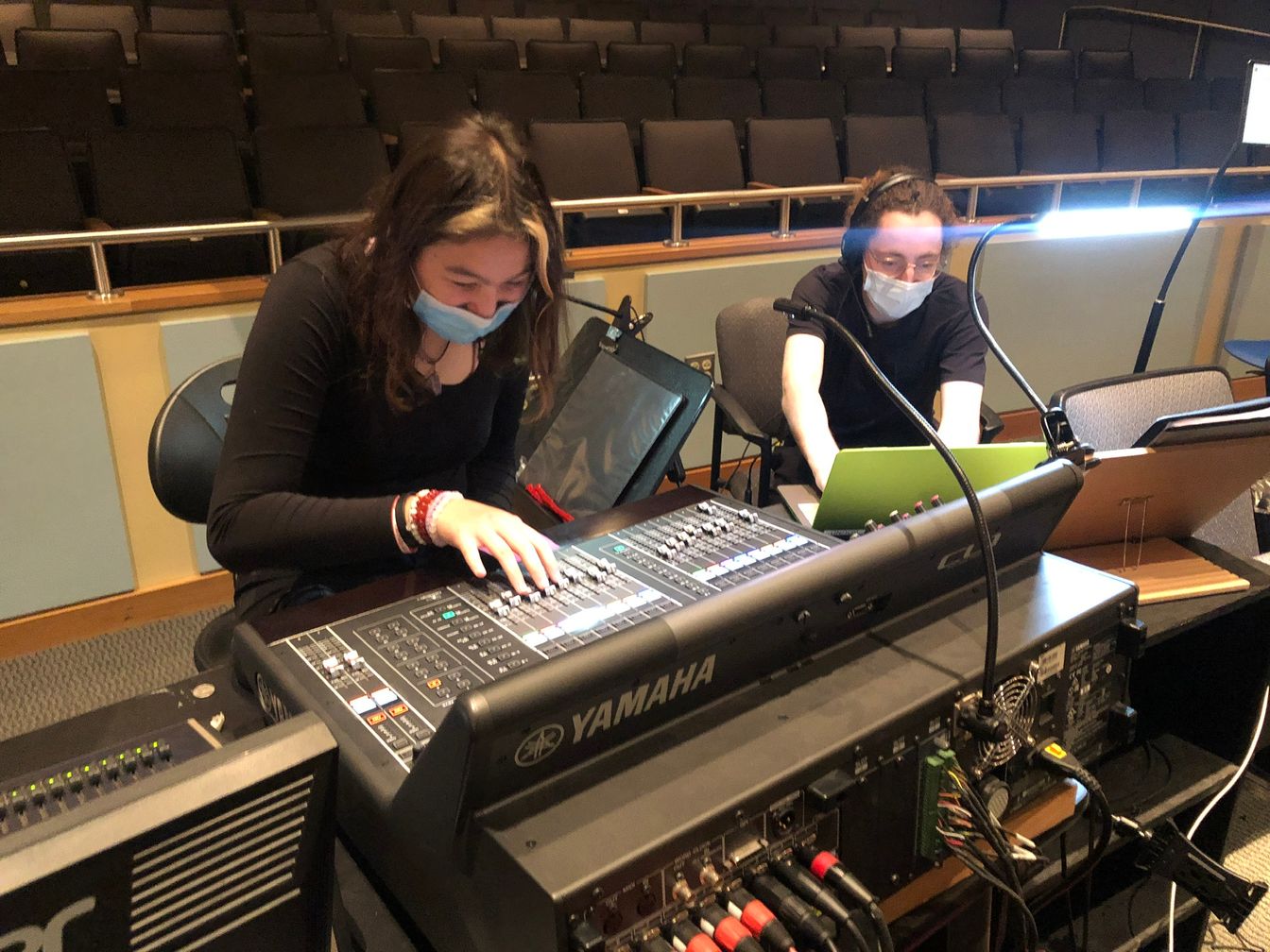 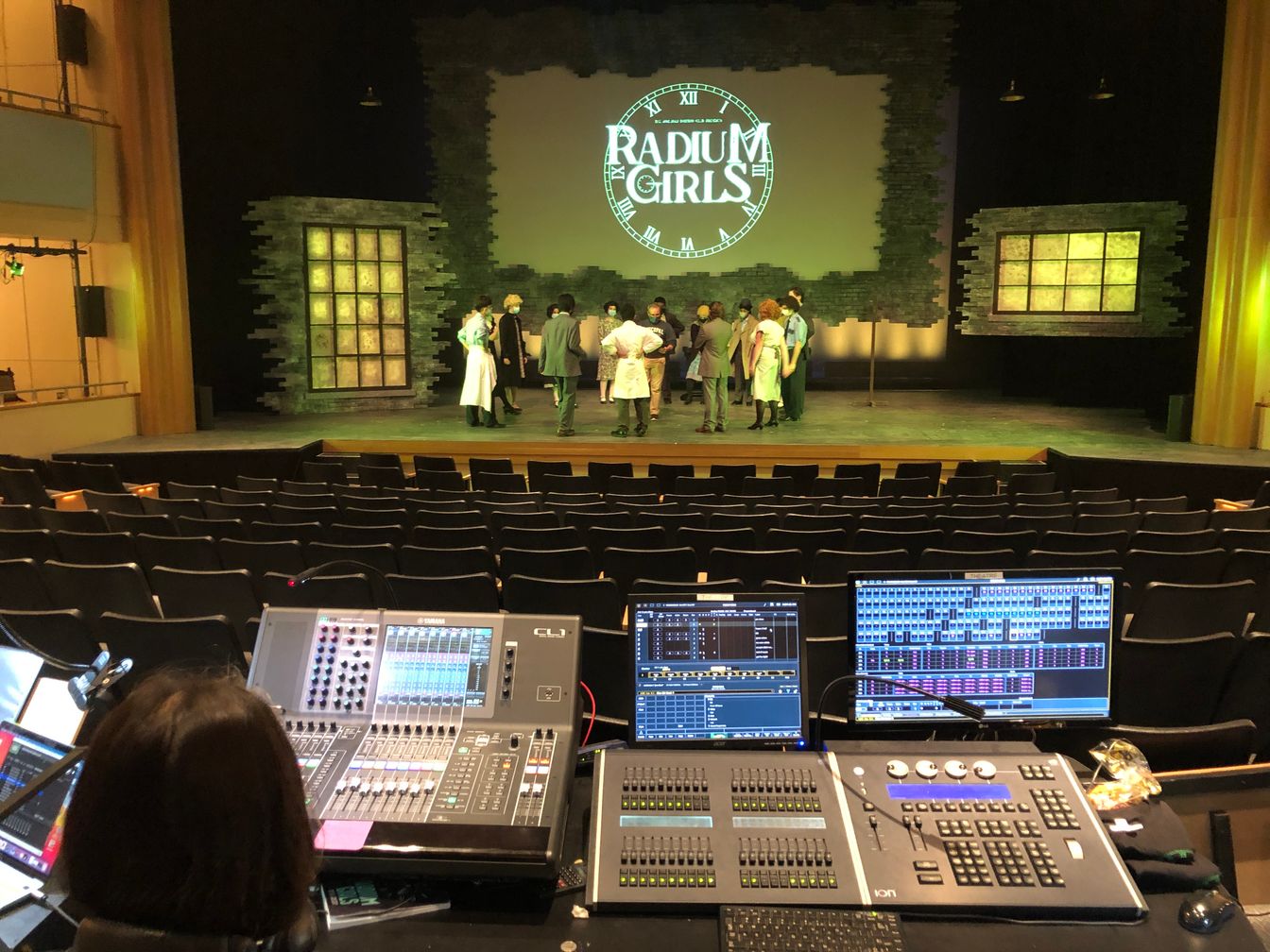 Once the curtain closed on Radium Girls, the tech crew scrambled to strike the set to get ready for the setup of Little Mermaid Jr.
"Our plan is to take the brick off of the two windows, and break the window panes on one of them to give a shipwreck appearance," explained Caroline. "The other one will have shelves added to it to become Ariel's grotto. The projection screen will be flown out, and then the addition of two six-foot curved staircases will be added to create the rest of the environments, including Prince Eric's ship, Prince Eric's palace, and the general ocean scenes."
"I think we are happy with what we landed on," said Ms. Tomkowich. "We are using lots of set dressings to help with the two different looks. It has been both challenging and exciting to work within these parameters."

After holding the spring performances on the Clark Campus Green, students were excited to be back on the indoor stage. "It is nice to be back in our amazing facilities," said Ms. Leight-Bertucci. "It is so great to be able to use our full theatrical setup for lights, sound, and the stage."

"It's bittersweet for sure. It has been exhausting, but I can already feel myself going to miss it when I graduate," shared Caroline. "The EA theatre community has some of the most amazing people I've ever met, and I'm not sure I'm going to be a part of another community that feels so much like family."
Little Mermaid Jr. runs Friday, Nov. 19 through Saturday, Nov. 20.
Powered by Finalsite