On Wednesday, Dec. 9, The Episcopal Academy Lawyers Network (EALN) hosted the third Engage Episcopal virtual event, a conversation between an alum and a current EA student, which centered around wrongful convictions. The two speakers were welcomed by Pat Devine '05, who, along with Gordon Cooney '77 and Zac Arbitman '05, founded the EALN in 2018.

Gordon Cooney '77, a partner at Morgan, Lewis, & Bockius, spent 25 years, working pro bono, representing John Thompson, who was wrongfully convicted of murder in 1985. Gordon's work aligns with the research of 2020 Lilley Fellow Vince Vento '21, who focused his intense research on exonerations in the United States. The men that Gordon and Vince got to know through their work all waited decades, waging long legal battles, to prove their innocence.

Though Gordon's principal focus is on corporate and civil litigation, in 1998, he and three colleagues at Morgan Lewis took on a capital case in Louisiana where death-row inmates were in desperate need of representation. When Gordon and his colleagues looked at Mr. Thompson's legal record, they weren't immediately convinced of his innocence, but they were convinced of the unfairness and unconstitutionality of the procedural discrepancies in his trial. Gordon shared, "It wasn't until 11 years later that we actually had hard evidence of John's innocence, and learned that the prosecutors had concealed favorable evidence that ultimately led to John's exoneration."

After watching the documentary When They See Us, which shares the stories of the Central Park Five, Vince told Gordon that he worked with fellowship advisor Max Kelly '06 to put forth a strong application for the Lilley Fellowship in the fall of his junior year. The Lilley Fellowship Fund awards fellowships to students who exemplify academic curiosity, intellectual rigor, and scholarly passion so that they may pursue an independent study to create a capstone product while working in a professional setting to develop their expertise and interests.

Vince was connected with exonerees through the Pennsylvania Innocence Project and was able to conduct bi-weekly interviews and view their trial transcripts. The more Vince learned, the more he wanted to focus his research on the human story rather than the raw numbers. "Those are really just numbers, and although we can make somewhat of an empathetic connection, we can empathize much more with a human and with a human's experience." His work focused on three men, Shaurn Thomas, Johnny Berry, and David Bryant, whose stories made a deep impression on him.

Gordon was deeply impacted by his experience, as well. "I got to know John and began to see him as the decent human that he was," he said. "I also saw the impact of his wrongful incarceration and his looming execution on his mother, his grandmother, his kids." For eleven years, Gordon and his team litigated the case and felt defeated when they ran out of appeals. 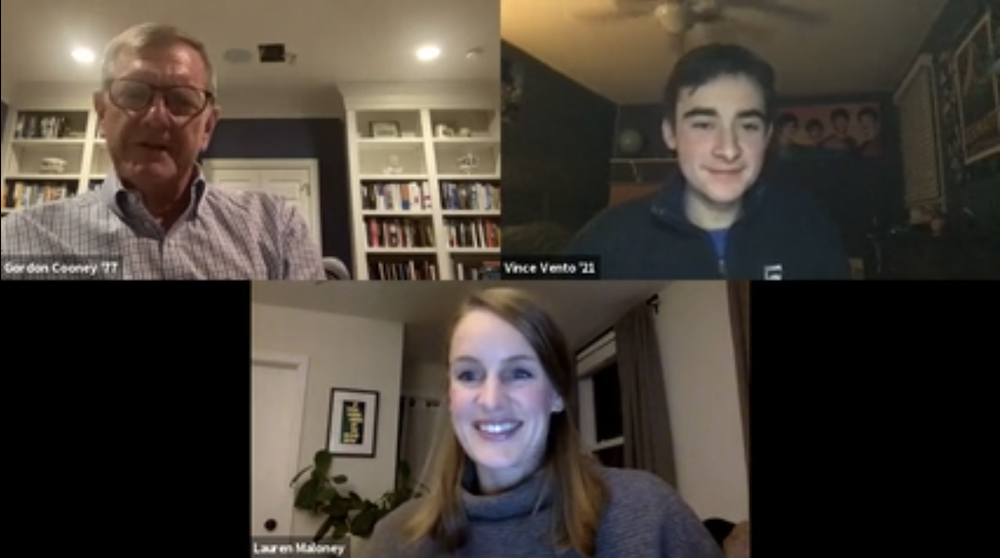 "When we were facing an execution, it was really troubling for me. It was the first time I had serious doubts about the judicial system. It made me wonder about my own abilities as a lawyer, quite frankly," Gordon said. Fortunately, evidence of a Brady violation came to light that exonerated him before his execution. After winning a civil case in Louisiana awarding $14 million in damages, the team lost the case in 2011 in the U.S. Supreme Court by a 5 to 4 margin. Mr. Thompson died in 2017.

"I've had cases involving billions of dollars of exposure, but a man's life was at stake here. The burden of responsibility of making sure that he got justice was considerable. But, by the same token, the satisfaction I received from this case and what I learned from John - in terms of the way he conducted himself, the dignity he showed throughout his incarceration, his ability to suspend anger, to make a difference in the world after he was released - is right there at the top."

Gordon asked Vince if he noticed any patterns between the three cases he studied. All three cases shared some intentionality behind the wrongful actions and corruption by the prosecutors or judges in the cases. "In two of the cases, it became apparent later on that judges did know a wrongful conviction was taking place but they decided to put their own agenda first because of how that would look for their careers."

"It's a human system. I would say most prosecutors and judges are trying to do the right thing, but that's not true of everybody," added Gordon. "When somebody's life is hanging in the balance, that's a scary thing."

The biggest takeaway for Vince was how little animosity the men held. "They try to forgive and move on and positively impact the innocence movement rather than harboring negativity and having hatred which I would argue they reserve the right to do, but it's really inspiring to see them do the opposite."

Gordon agreed, sharing that even though Mr. Thompson lost 18 years of his life due to the corrupt actions of his prosecutors, he was not angry or embittered. "John was just grateful to have a new lease on life," he said. Seeing them turn it around for the better has given Vince a lot of motivation to continue working in this area. Vince feels indebted to the three men he formed a relationship with for opening up to him and sharing their experiences so freely.

The two spoke about how future lawyers might affect the legal system in a positive way. "It's up to lawyers to stand up and fight for what is right," said Gordon. "One of the great opportunities we all have with a fine education we get from a place like Episcopal and beyond, is to take the skills that we have, and to fight for people that we can help." Gordon sees it as his obligation to help those who need the help, not just those who can afford it.

"There are great opportunities for us to make positive change," he went on. With the unmasking of many of these cases, Gordon explained, issues in the criminal justice process, such as jury selection, eye-witness identifications, and evidence sharing, are gaining more scrutiny.

Vince agreed. "I agree that our justice system is, in fact, the best justice system in the world," said Vince, "but we have so many opportunities and intelligent people, and we should be using our resources to make things even better [...] My biggest takeaway is that we need to start improving, even on a small level."

In Gordon's view, one of the ways that the system could be improved is to ease federal restrictions for exonerees to be able to sue prosecutors in civil court. "There is a lot of injustice that is not being rectified with any compensation," he said.

Through speaking with and learning from the exonerees, Vince was able to tell their stories in parallel to point out unique nuances while simultaneously painting one broad picture on the life of an exoneree in his final fellowship research paper.

Watch the discussion in its entirety online. The final Engage Episcopal event of 2020 will take place on Wednesday, Dec. 16 at 7 p.m. Learn more and register here.