After a festive, fun-filled Spirit Week, students celebrated the return of EA/Haverford/AIS Weekend.

"After last year's hiatus, we were thrilled for the return of this long-time tradition," said Athletic Director Todd Fairlie, Hon. "It is a special weekend for our entire student body and fans of all ages." View the weekend's photos here.

It was a banner day for the EA girls' teams as they beat rival The Agnes Irwin School, in all four contests.

The tennis team got things started early with a 5-2 win on Thursday, Nov. 11. "It was a little bit more pressure batting lead-off and being the only event taking place that day," explained Coach Whitaker Powell, Hon. "It was challenging in that our students were not able to be there to cheer us on, so it was definitely a home-court advantage for AIS." But EA dominated, winning all three singles matches and 3rd and 4th doubles. The match was played a day early because of rain in the forecast. "It was a great way to start the weekend, and it allowed the players and coaches to enjoy the festivities Friday!" said Coach Powell.


The girls' cross country team seized the momentum going into the day on Friday. Nov. 12. "It was fitting that our seniors, Kathryn Lynn, Brianna Bellinghieri, and Kristin Jorgensen, finished 1-2-3 for us," shared Coach Lauren Finnical, Hon. EA runners also placed 5th and 8th as the team ended the season with a 19-39 win. "Our win on AIS Day was an excellent way to cap off a great season for our team," said Coach Finnical. 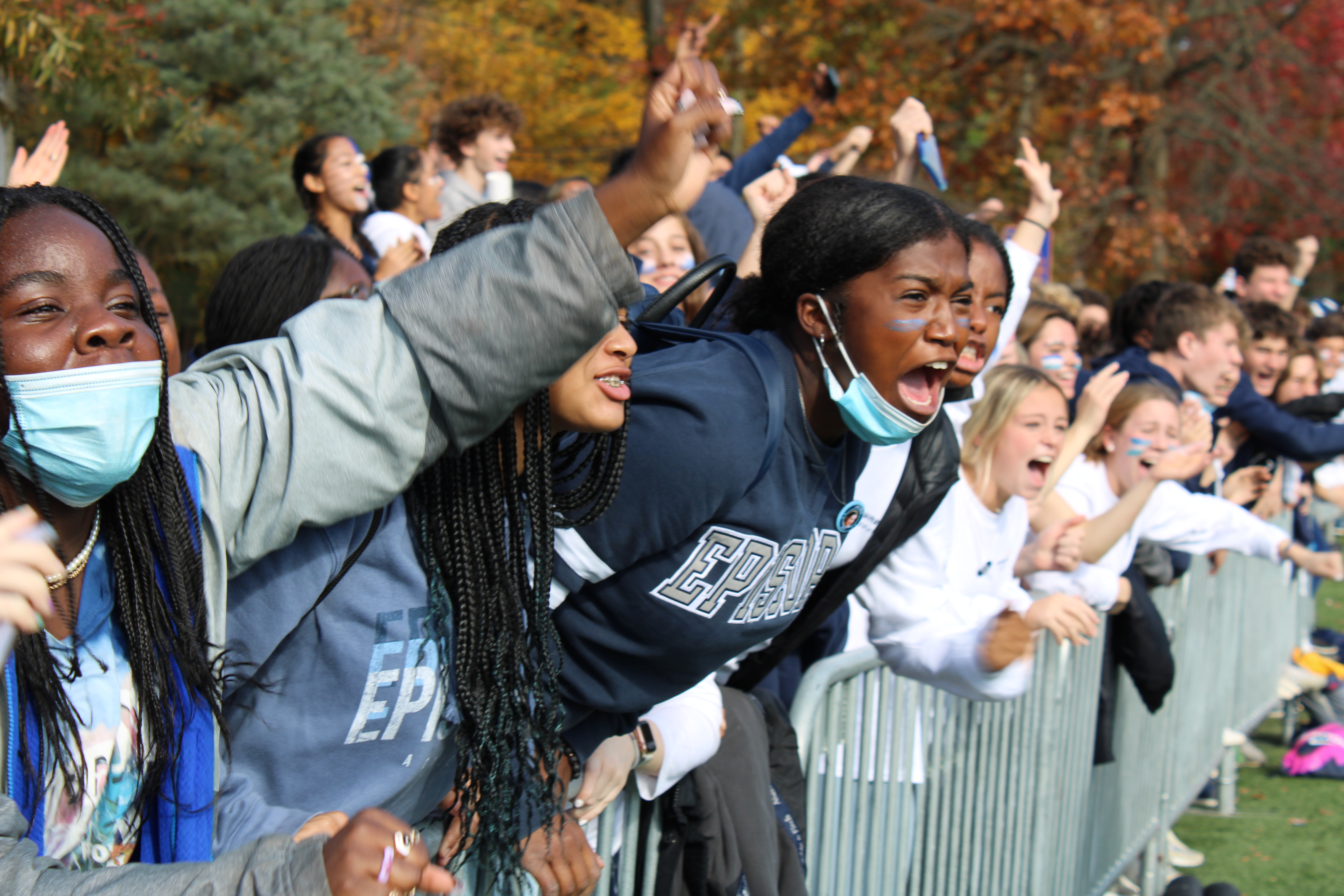 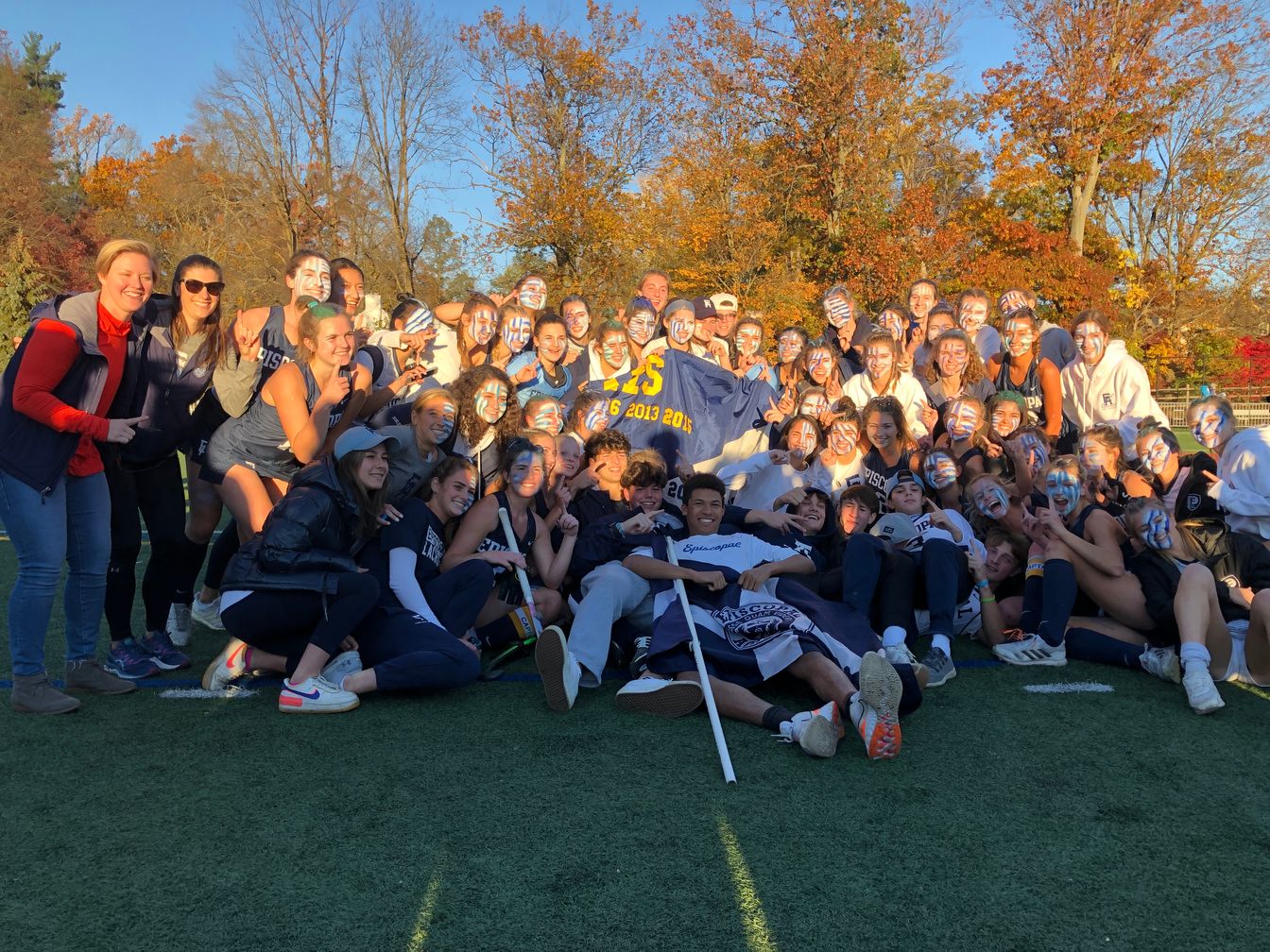 With the enthusiastic encouragement of EA's student section, the soccer team battled the Owls- coming away with a 1-0 win.

The Inter-Ac Championship field hockey team wasted no time getting on the board, scoring within the first 10 minutes. By halftime, the score was 2-0. EA Field Hockey ended the day with a 6-1 win. The Banner remains at EA for another year.

The golf team kicked things off for the boys' quest to keep the Sweater. Under sunny conditions, the team played the back nine at Gulph Mills Golf Club on Friday. "The boys were excited to have the fans back at EA/Haverford Day and we embraced getting things started for the weekend," said Coach Doug Borgerson, Hon. "The boys from Haverford played their best golf of the season, and we congratulate them on their excellent play. Losing close is always frustrating, but we held our heads high knowing we put forth a great effort." EA lost by two strokes, 192-190.

The boys' cross country team hit the course early- running away with a 15-49 win to start the Saturday competitions. EA runners took the first five positions and notched the first win of the day for the boys. "We took great pride in kicking off the day on Saturday with a win," said Coach Jim Farrell '82. "We had a very strong race. Haverford ran well, and they were excited to race on their home course. They gave everything they had, but we were just too deep as we had 14 out of the first 19 runners."

It was a hard-fought battle for water polo as the team battled a tough Haverford squad. At the half, Haverford led 6-2. EA battled to the buzzer but lost the contest 19-11.

As the clouds, wind, and rain rolled in, the soccer team took the field, hopeful for another season win against the Fords. "The quickest 80 minutes of soccer for the year were bookended by two amazing goals," said Coach David Knox, Hon. "The win marked three wins in a row on EA/Haverford Day and five wins out of the last six against them. The team played incredibly well in extremely tough conditions, and I am so proud of each and every one of them. They played with class and integrity, exactly the way the game is supposed to be played." With goals in each half, the team came away with a 2-0 win. 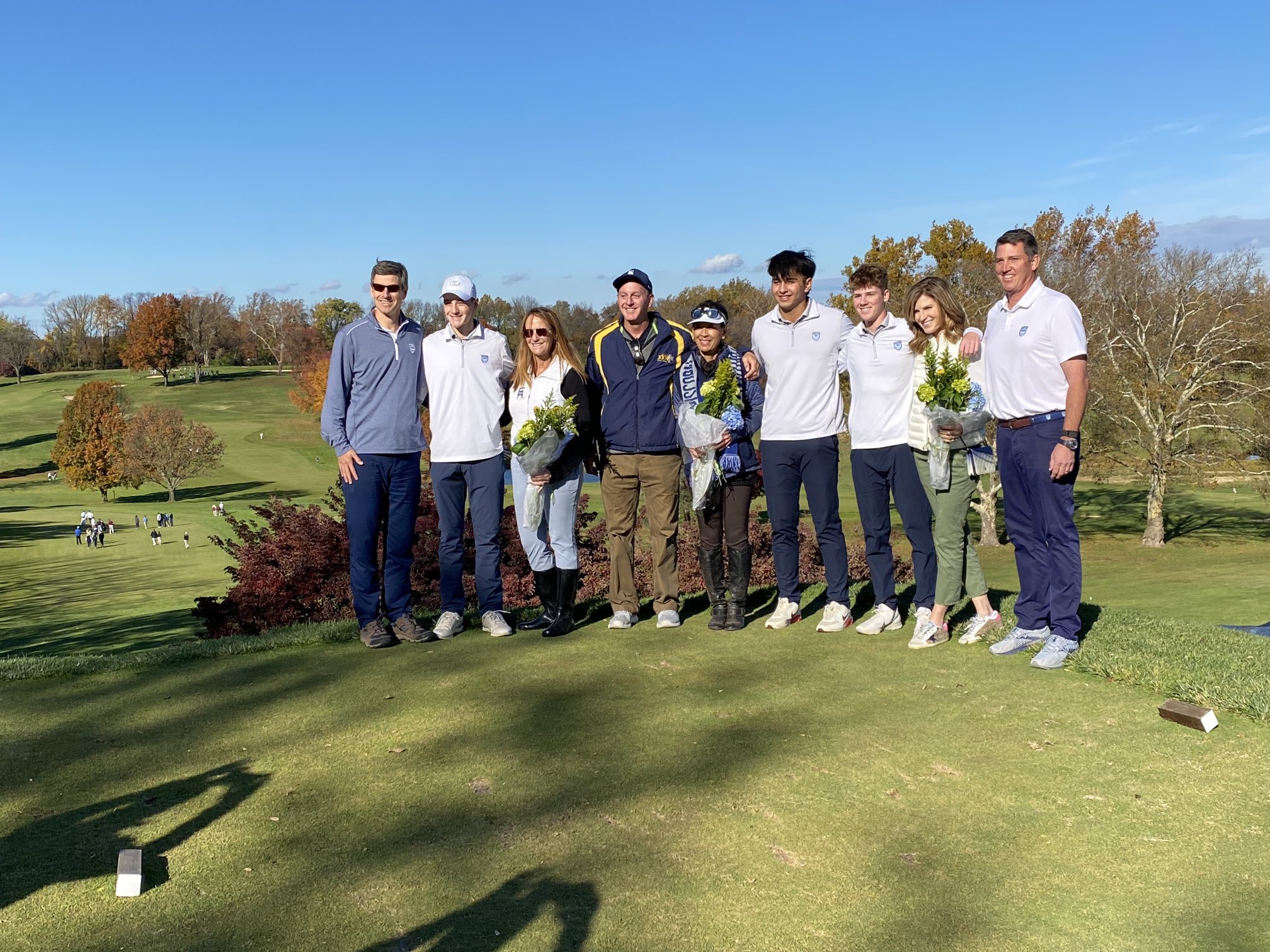 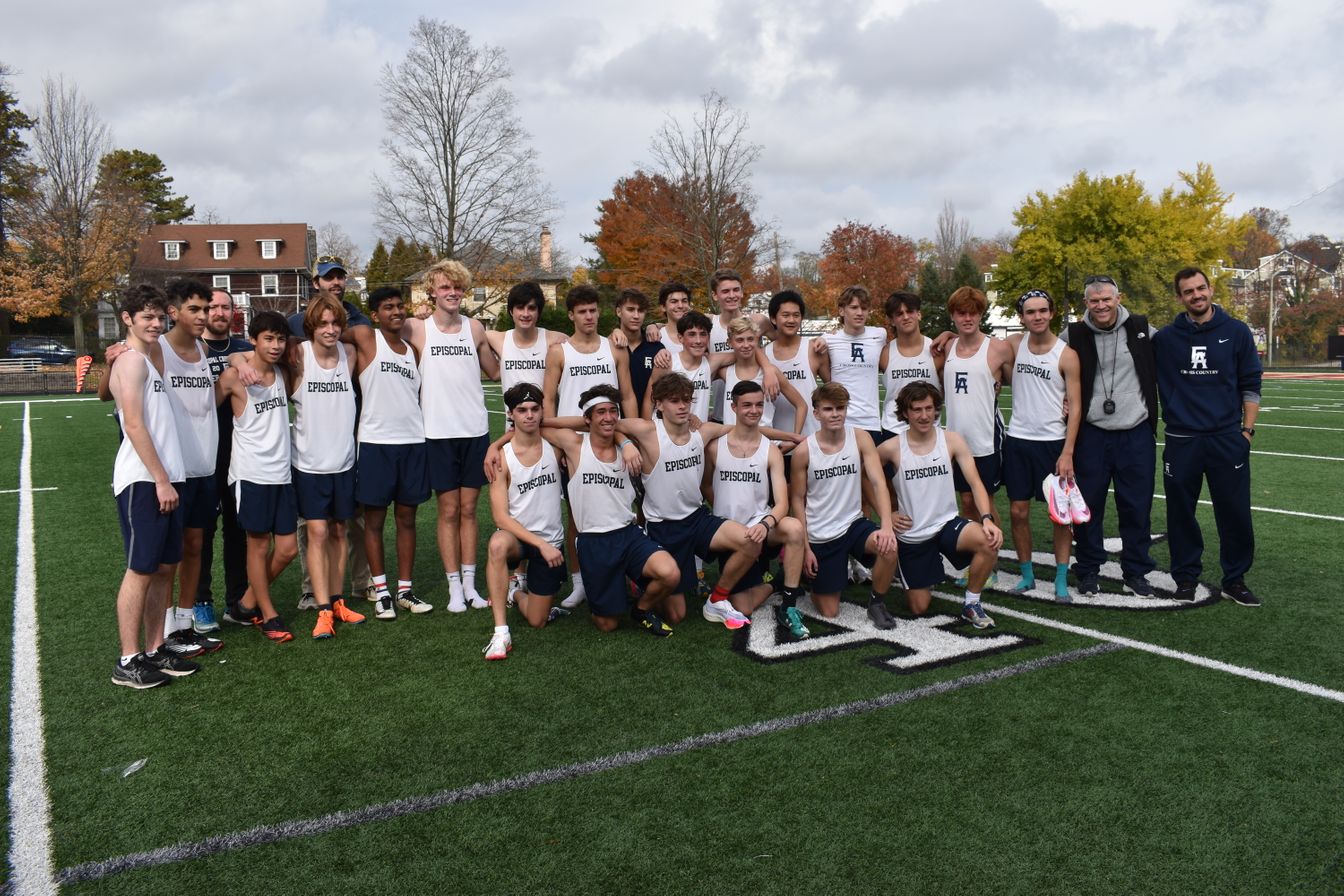 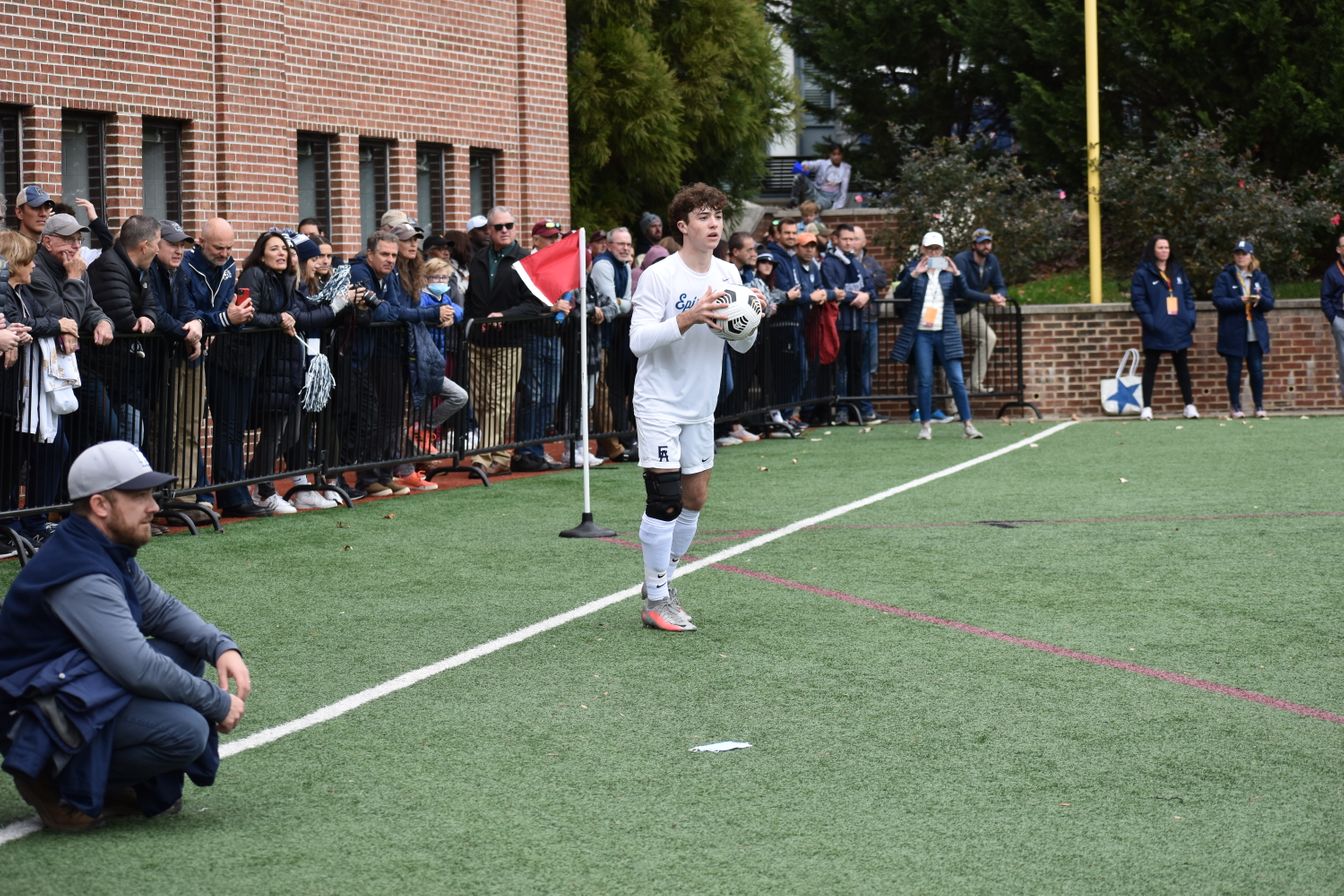 With two wins for each school, the final battle for the coveted Sweater came down to football. Haverford scored first as EA answered back to make it 7-7. At the half, the score remained tied. Within a few minutes into the 3rd quarter, the Fords found the end zone to make it 13-7. In the final minutes, Haverford ran for a first down to run out the clock.

"It was a disappointing finish to the day," said Coach Fairlie. "But I am proud of the team and all of our student-athletes for their perseverance throughout the season and especially during the rivalry weekend. Everyone played hard, and showed grit, determination, and good sportsmanship."