On Friday, March 5, Dr. Kate Marvel spoke to the Upper School via livestream as part of the Clare Foundation STEM Speaker Series. 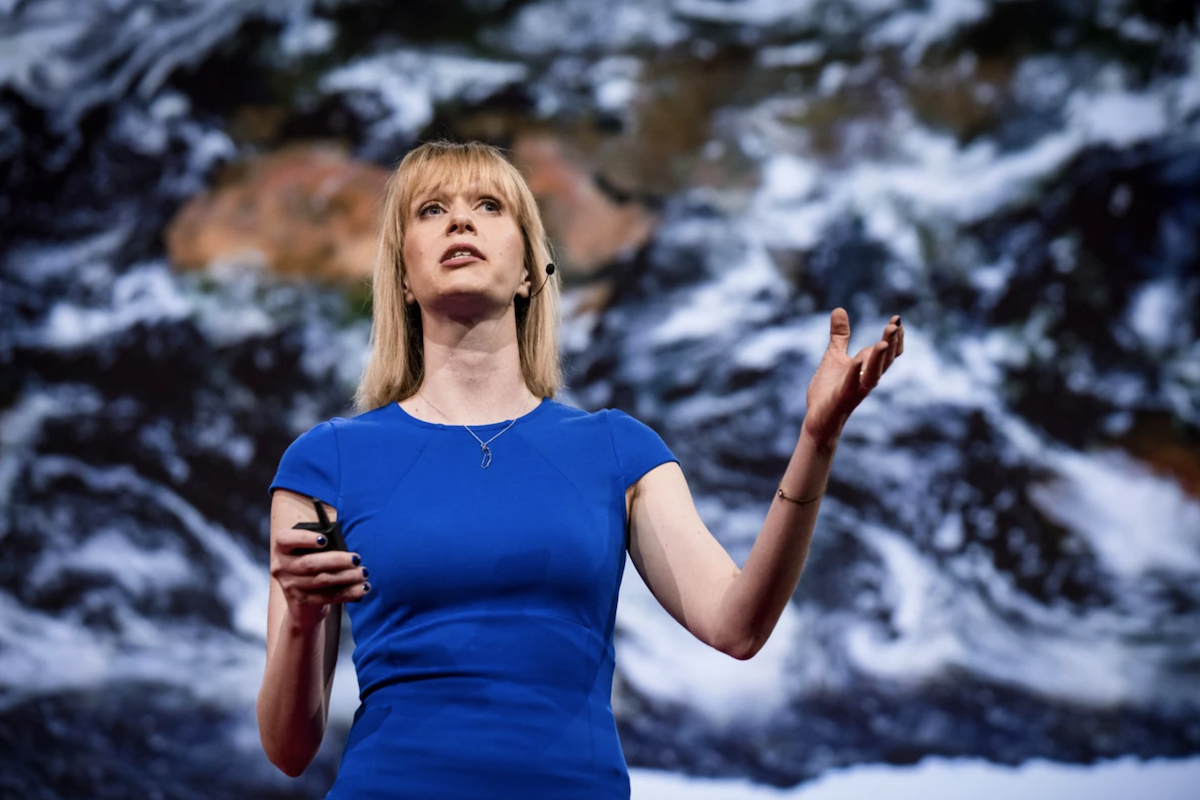 Dr. Marvel is a climate scientist and science writer based in New York City. She is an associate research scientist at the NASA Goddard Institute for Space Studies and Columbia Engineering's Department of Applied Physics and Mathematics, and writes regularly for Scientific American in her column, Hot Planet.

Established through the generosity of the Clare Foundation, the goal of the specialized series is to expose students and faculty to dynamic, innovative, and creative thought leaders from a range of STEM fields.

The Earth is Warm and Getting Warmer

Dr. Marvel begins by discussing just how special our planet is in its ability to sustain life. By orbiting just the right distance from the sun, and having just the right amount of greenhouse gases in its atmosphere, Earth benefits from the so-called 'goldilocks effect: it is 'just right' for sustaining life. While many think greenhouse gases are a bad thing, some greenhouse gases are critical for our atmosphere. Without them, Earth would be as bitterly cold as the moon, with an average temperature of -1 degree Fahrenheit, compared to its current average of 60 degrees Fahrenheit.

That warmth is what allows the water on Earth to flow in liquid form. Liquid water is what makes life on Earth, and likely anywhere in the universe for that matter, possible. "You can't make water, and you can't make it go away," says Dr. Marvel. "The water on the earth's surface is very, very old. Some theories say this water is older than the Earth itself."

You can read and learn more about the evidence, causes, effects, and solutions surrounding climate change on NASA's website, but the starting place is to understand that the Earth is, in fact, warming. Earth-orbiting satellites, ice cores, tree rings, ocean sediments, and so much more evidence can help us understand that the planet's average temperature has risen about 2.12* F in the last century, with 2016 and 2020 being the warmest years on record.

What is Behind the Warming Trend?

We know that the Earth is special, and we know it is warming, but how sure can we be of what is causing it? Dr. Marvel spent much of her presentation helping students understand in greater detail how and why scientists are so certain of the many causes of climate change, and just how much each factor - natural or man-made - has contributed to the heating or cooling of the planet as a whole over time.

There is an abundance of factors - from tiny wobbles in the Earth's orbit to the presence of chlorofluorocarbons - that can impact the average temperature of the Earth, both temporarily and more long-term. However, scientists are fairly certain of what those factors are and what we can expect them to do in the future. "Scientists don't agree on everything - we argue all the time," she says. "For scientists to agree on something, it needs to be really not controversial."

The science behind climate change, she said, is fairly well-established.

Many factors can have a cooling effect on the planet. Incredibly, these things have worked to keep the heating factors, like greenhouse gases, in check. Dust and dirt produced by asteroids, volcanic eruptions, and even pollution, can act as barriers to block out the sun and actually cool the planet. In addition, as humans change the surface of the planet - replacing dense forests with farmland and concrete - we actually increase the reflective surfaces, driving down the amount of heat that is absorbed.

The Earth can also be cooled or warmed, intermittently, by something called Milankovitch cycles, or wobbles in the Earth's orbit. One-such wobble is what caused the ice-age. "But we can measure the predicted effect of these," says Dr. Marvel, "and they are not the driver of the long-term warming trend." 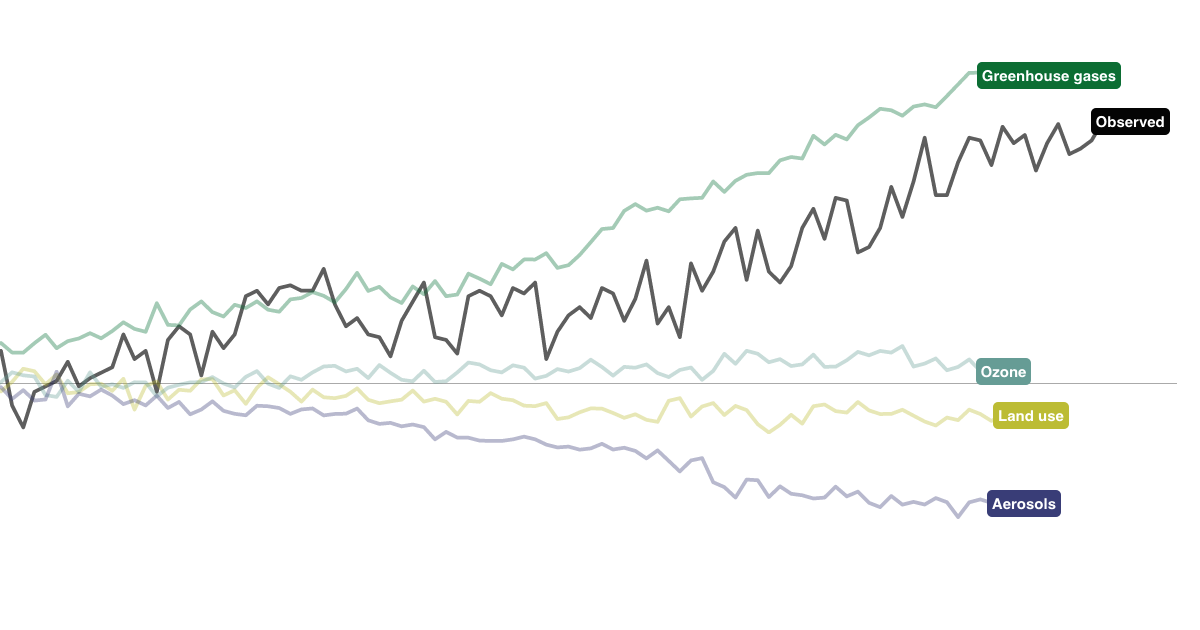 Source: Bloomberg: "What is Warming the World"

The culprit is carbon dioxide (CO2), a natural byproduct of a combustion reaction. "We generate and use a lot of energy that puts things in the atmosphere," says Dr. Marvel. "Humans have increased global CO2 concentrations by over 45% since the beginning of the industrial revolution. They warm the planet actually more than we have observed." This is due to those cooling factors mentioned earlier, as indicated in the graph above.

Looking to the Future

Dr. Marvel uses tools called climate models to help her predict temperature-driven changes to the Earth and the impact they will have on future generations. She calls them 'toy planets of the future.' "Honestly, some of the things these models are telling us are very scary," she says. 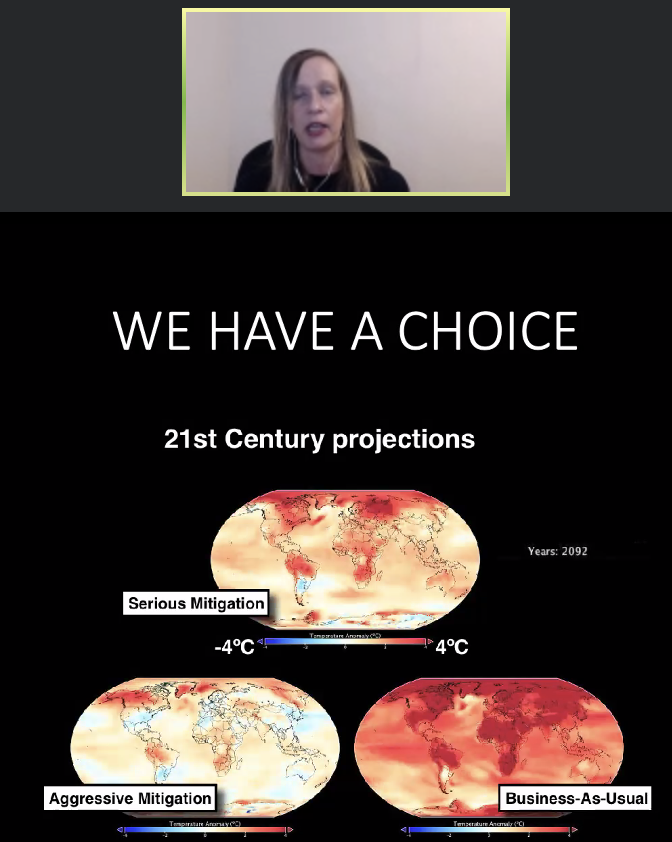 She shared that all hope is not lost and that it is very much something that we, as humans, have some control over. She finishes her presentation by saying, "I think this planet is worth it, I think we are worth it. I think it is up to your generation to have the hope and courage to preserve the planet. When you are someone's ancestors, I hope they look back and tell stories about you, and how you saved this planet for them."

After her presentation, Dr. Marvel virtually visited with students in Biology and AP Environmental Science classes and the Save the Planet Club to answer questions.

Dr. Marvel received her bachelor of arts degree in physics and astronomy from the University of California at Berkeley and her Ph.D. in theoretical physics from the University of Cambridge. She focused on climate science and energy as a postdoctoral science fellow at the Center for International Security and Cooperation at Stanford University, and at the Carnegie Institution for Science in the Department of Global Ecology.