The playing field, where Coach Buggy notched hundreds of wins with the field hockey team, was officially dedicated and named Buggy Field as she snipped the shiny blue ribbon.

"My greatest joy has been watching firsthand so many young girls and boys grow and flourish as a result of their EA athletic experience," shared Coach Buggy. "But being on the field with the hockey players was always the very best part of my day!"

"We pray with grateful hearts in how Coach Buggy cultivated respect among her athletes to care for the rules of the game, the health of their bodies, and the value of their opponents. May the dedication of this field, in her name, grant reverence to the honor of our mission in developing students in mind, body, and spirit." 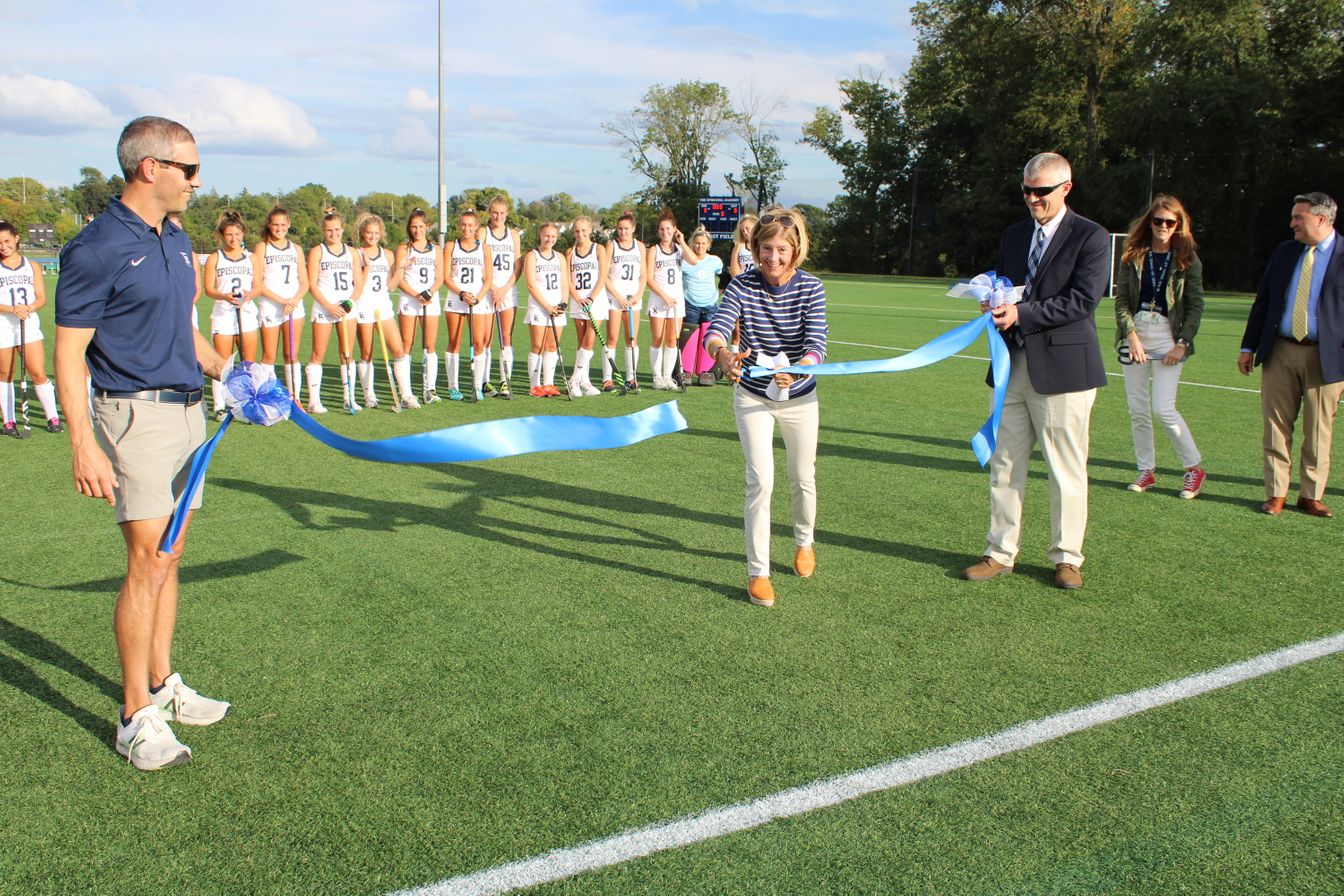 "The Episcopal Academy is a special place," remarked Coach Buggy. "As an institution, it is steeped in meaningful tradition, yet our leaders have been forward-looking and unafraid to explore new frontiers. I was the beneficiary of this forward-thinking approach when [Head of School] Jay Crawford '57 hired me as the first female athletic director in the Inter-Ac League."

"While the school had been enrolling female students for a decade at that point, many families were still unsure about sending their daughters to EA," said Head of School Dr. T.J. Locke. "It would take someone with great vision, determination, and talent to build a leading girls' athletic program."

Coach Buggy wrapped up her coaching career in November 2019 with an impressive 478-97-11 career record. During her tenure as athletic director, 30 varsity teams won more than 157 Inter-Academic League and Pennsylvania Independent School (PAISAA) state championships. She retired in June 2020.

"The athletic piece is just a part of the puzzle. The competition is going to end at some point at some level. But, if you can take those qualities and characteristics that you hone as being a part of a team, if you can take that and carry that on to the rest of your life it will serve you well. I hope that it is always something bigger than just the athletic experience. I hope it is more than that, as it has been for me."

Alumni sported their old jerseys and jackets; some even brought their vintage field hockey sticks. "It's overwhelming, it's such an honor. I am overjoyed, and I just look forward to knowing that so many kids will get an experience much like what shaped my life," said Coach Buggy. "Learning how to be on a team and getting the joy and excitement of high school athletics." 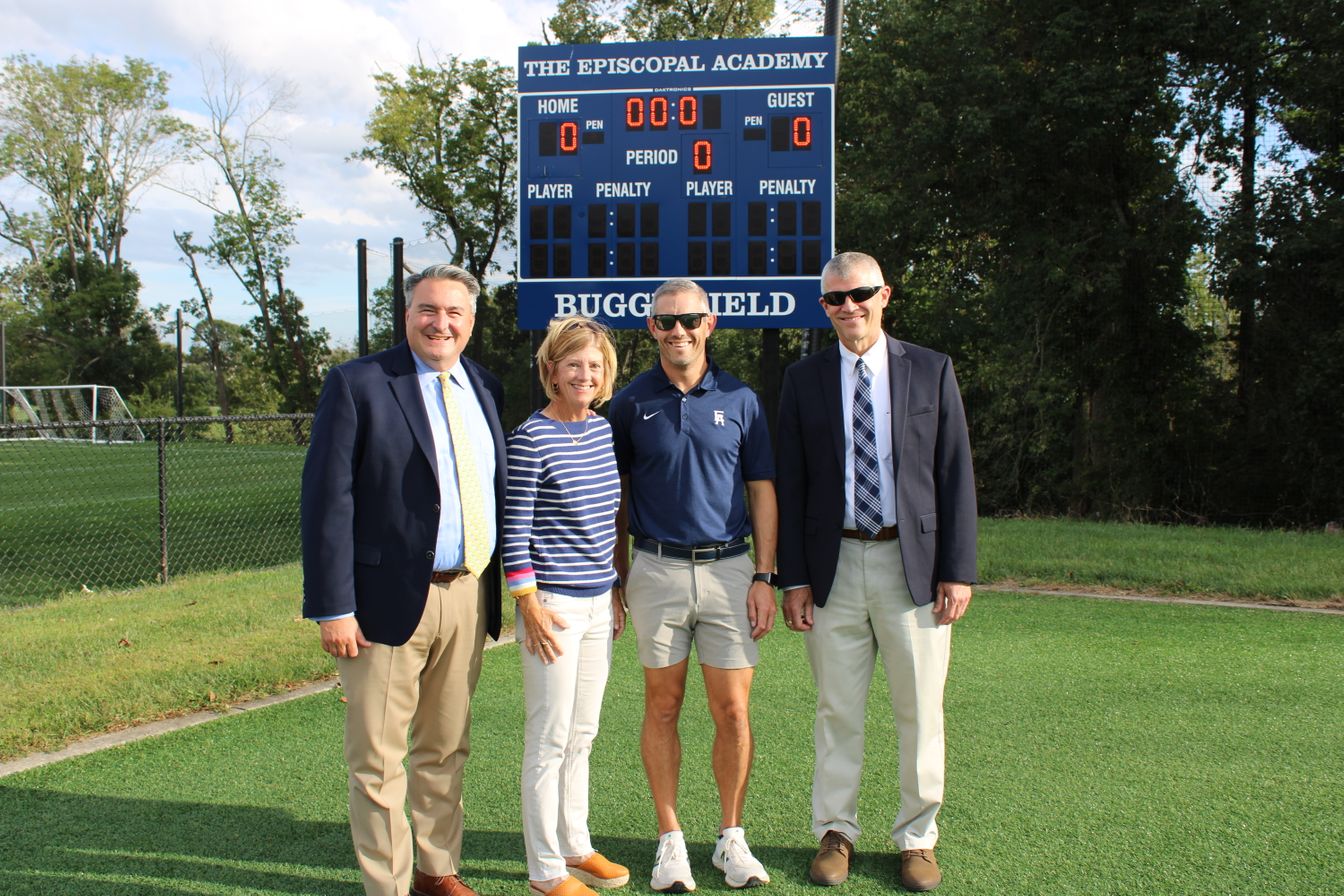 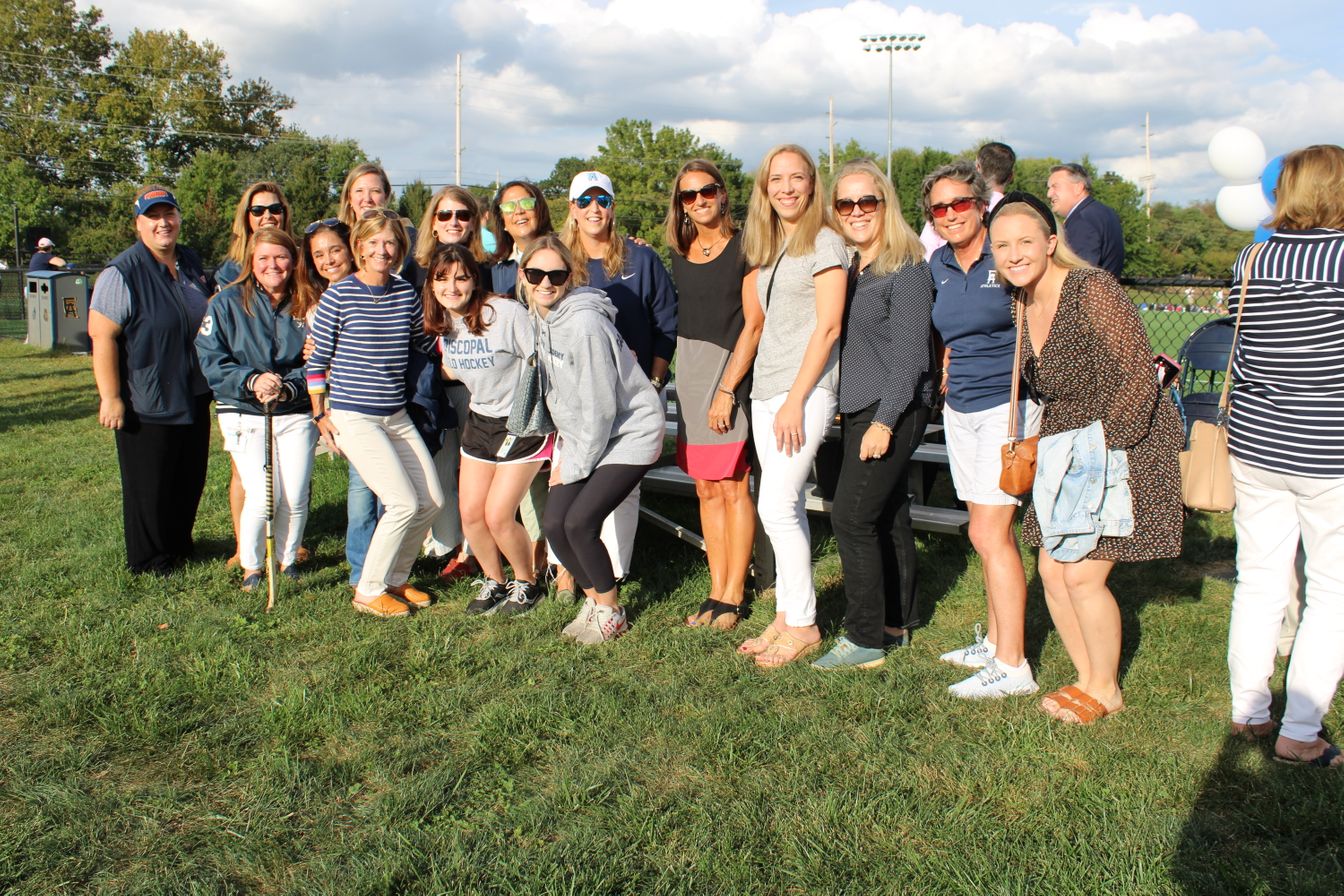 Coach Buggy credits her parents, high school coach Pat West, and Vonnie Gros, her 1984 Olympic coach, for teaching her early on that there was a future in women's athletics. "Vonnie taught me what it means to be accountable, to work hard, to be a good teammate, and to train your mind and your body so that you are part of something not just on the field but something bigger than yourself."
After the ribbon-cutting, Coach Buggy headed to center field for the coin toss as the captains representing EA and Germantown Academy looked on - eyes glued to an icon.
As she walked back to the sidelines she remarked, "I am just so flattered, I am honored, I am touched, and 34 years went very quickly. I just feel so blessed. This is just a culmination I could have never imagined. Thank you from the bottom of my heart. Now it's game time!" 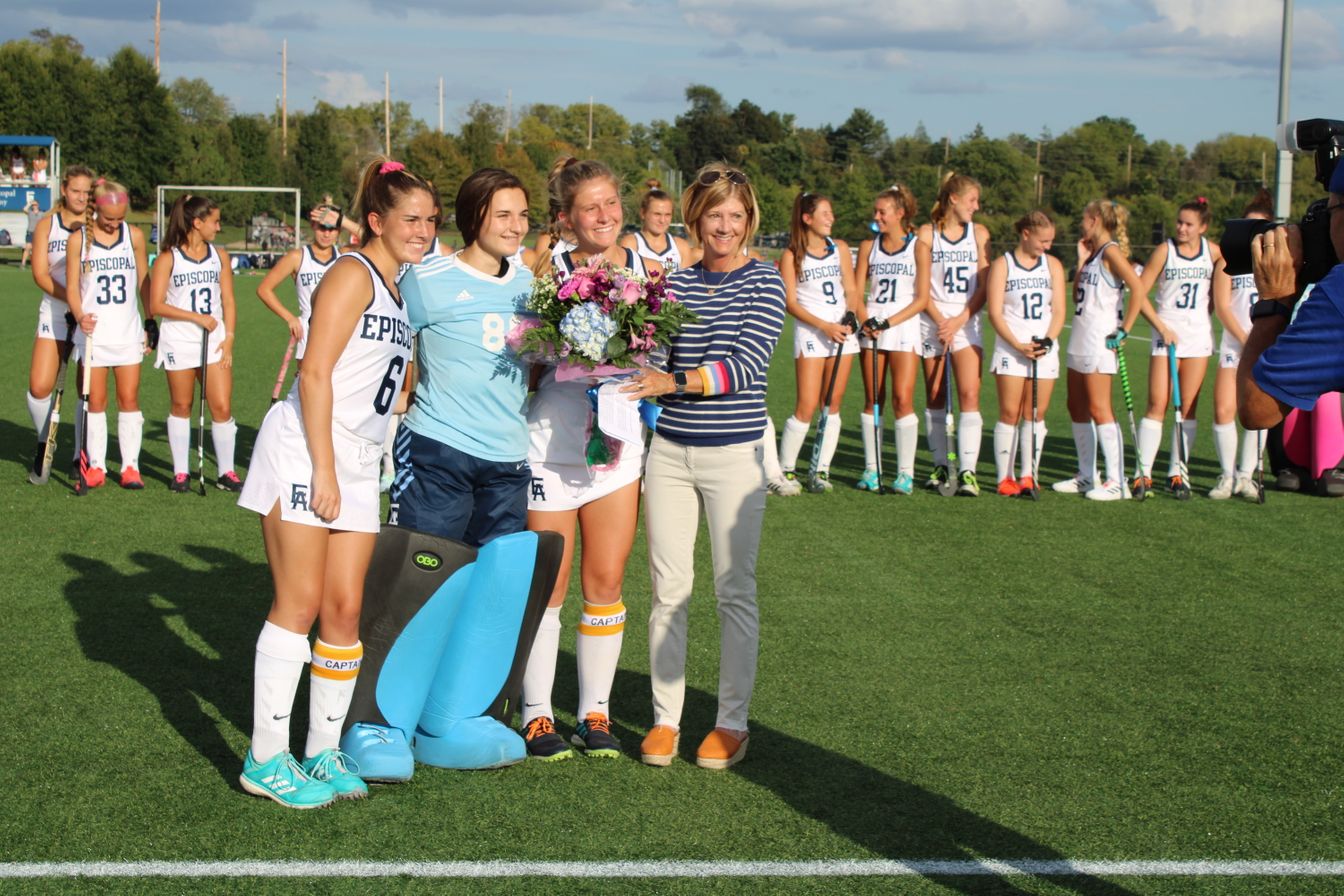 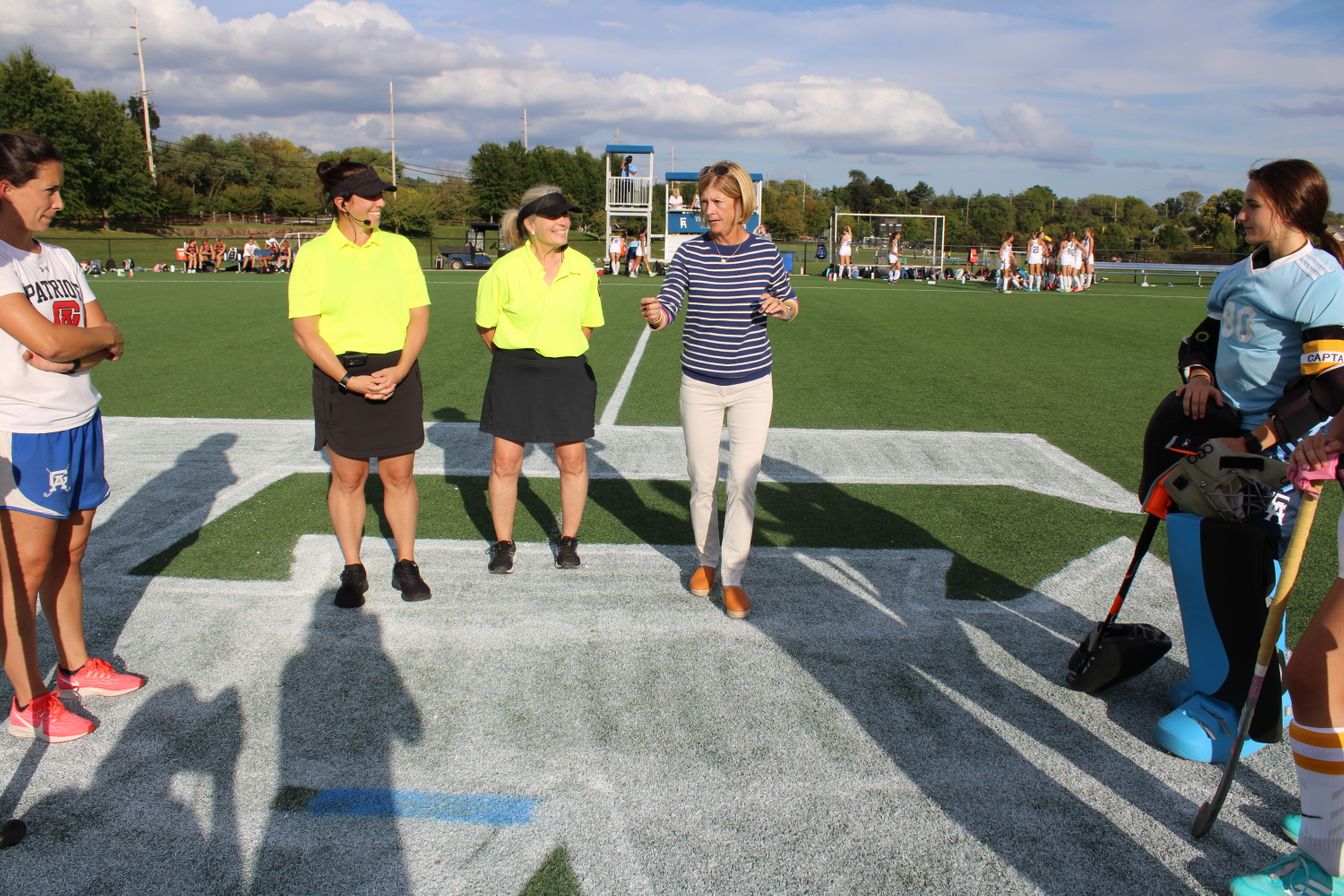