Juliana Di Carlo '20 is the 2019 Benjamin H. Read '43 Scholar and winner of The Chuck Bryant, Hon. Award. Over the summer, Juliana traveled to Accra, Ghana to teach women how to speak English and about sanitation and financial independence.

Juliana's research and project tackled the issues of education, healthcare, and income for women. During her Ben Read Lecture during Chapel on Friday, October 11, Juliana shared her experience with her classmates and Upper School faculty.

"When I was little I had a hard decision to make. I had to decide whether I wanted to be a princess, a doctor, a pop star, or the President of the United States. So, at age 6, I decided I would hold each of the four positions at least once, and not necessarily at different times."

Her grandmother ("Nonna"), would always encourage her to be anything she wanted to be. "However, no one ever told my Nonna to 'dream big,'" Juliana shared. "She was pulled out of school after completing Kindergarten. Her stepmother believed she, as a girl, would be better served helping around the house and working the land. She was never taught to read and write, much less encouraged 'to be anything she wanted to be.'"

Juliana wanted to inspire young girls in Ghana to dream big, like her Nonna had done for her. While in Ghana, Juliana volunteered with the nonprofit Global Vision International, where she worked in classrooms in the villages of Oshiye and Kokrobite, outside the capital of Accra.

In one classroom of 17 students, only four were girls. She noticed that the female students were often not encouraged to speak up in class. "I quickly learned that the fearless young girls, who I saw running in the yard earlier, became timid and fearful once they were in the classroom. They would not raise their hands for fear of being incorrect and consequently reprimanded by their teachers or teased by their male classmates." 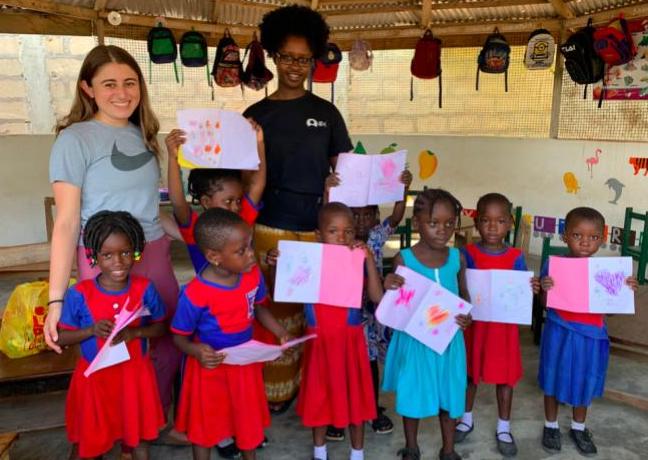 In an effort to help empower the female students, Juliana created a curriculum for an after-school enrichment program. "Each afternoon we would work with a different grade level, bringing books, math worksheets, and art materials from base camp. I became determined to help Mirabelle, Kristabel, Junior, Jane, Blessing, and all the other girls, become just as fearless in the classroom as they were on the playground," Juliana said, "I wanted to make sure they understood that they are unstoppable, both inside and outside of the classroom." Four months later, the program is still in place at the Divine Homes Educational Center.

"Two-thirds of the world's illiterate population is female: 496 million women cannot read or write," said Juliana. "This number is astounding, and I hope that one day, women will be just as educated as men."

The Benjamin H. Read '43 Lecture & Award was established by the Class of '43, together with his family, friends, and colleagues, and honors the memory of their classmate who was a statesman, peacemaker, environmentalist, and scholar of world affairs. This program supports annual seminars or lectures by distinguished figures in public affairs, as well as an award presented to an Episcopal Academy student in the V Form.

Last spring, Courtney Spaeth '92 endowed the fund that provides the financial support for the research and development conducted by the Benjamin H. Read Scholar in honor of Chuck Bryant, Hon. This financial award, provided to Ben Read Scholars, is now known as The Chuck Bryant Award.