Behind The Scenes of Les Miserables
May 10 2019

The EA community is abuzz over the Domino Club's production of Les Miserables.

Students, of all ages, can still be heard in the halls singing and humming some of the musical favorites- including Master of the House and Do You Hear the People Sing.

Watch the behind the scenes video here.

Discussions about taking on the challenge of tackling such a big production, like Les Miserables, began last summer.

"There are so many challenges," explained Upper School Theater Department Chair Dan Clay, Hon. "It took me a little bit of convincing, but the students were interested in doing it and they convinced me that this particular year was the year to do it."

Eighty Upper School students were in the cast and tech crew- the most participants ever in an EA production. Mr. Clay did not count up the total number of rehearsal hours, "but it was a lot!" said Mr. Clay.

There were nearly 400 costumes, multiple wigs, elaborate make-up, and hundreds of props. One of the leads, senior Jack Franklin who played Jean Valjean, was given special permission to grow a beard- since a beard is not permitted under the EA dress code."Having a real beard on him instead of coming up with some fake beard that doesn't look as good was so much better," said Mr. Clay.

"It is the biggest show that I think we have ever done," said dance teacher, and Les Mis choreographer and assistant director Cara Lavallee. "If we were ever going to do it, this year we have a lot of seniors who are very strong singers and we really wanted to take advantage of that and do a show like this with them." 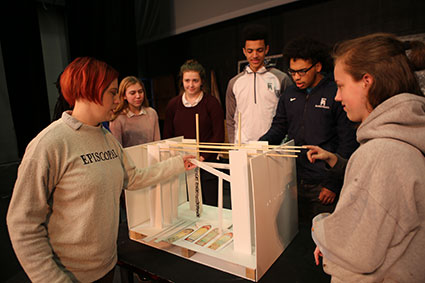 "Technically it is a pretty challenging show," shared technical director Kelly Leight-Bertucci. The tech team used a rented motorized revolving stage that allowed for constant, smooth scene changes. In March, the crew started with a foam board model of the stage to plan the various pieces of the set and props. "While other things are happening, another set just has to emerge," said Mr. Clay.

"The biggest scenic element is the barricade," explained Ms. Bertucci. "It breaks apart in four pieces, it comes together as a single unified element across the entire stage."

The live music for the production was also a challenge. For the first time, the orchestra played in the Upper School orchestra room- as musical director Jim Erwin watched for cues on a laptop live stream. "The issue with Les Mis is the music never stops, so you can never really even look at the screen. The whole time you are conducting. Every piece just goes right into the next piece. But we love it, the music is just so beautiful!" The orchestra, which included three student musicians, played for one-hour and 15-minutes for Act 1 alone. 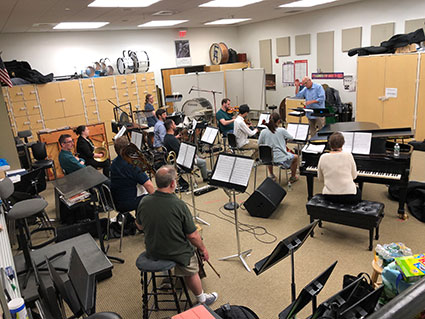